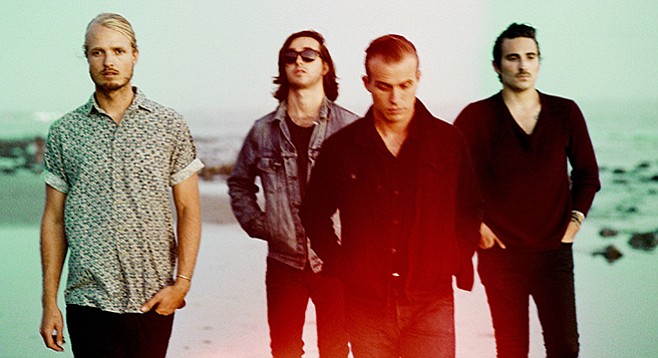 Cream of the L.A. pop-rock crop — the Shelters

The Shelters live on Jam in the Van

Enough bands like the Shelters, and Los Angeles could come back to its former glory days as the bull’s eye of the rock-and-roll business. It used to be that way until the digital age scrambled everything in the industry and legendary nightclubs, recording studios, and record labels died. Meanwhile, many pop acts migrated east and Brooklyn, New York, became the next big rock scene. There, musicians found cheap rents, a growing community of successful bands that had made it, and they discovered the truth that it is much easier to launch a tour along the East Coast. Out here in the West, lucrative gigs are miles apart and van tours can — and often do — die due to gas prices. Many bands out this way hit that wall and end.

The original Shelters band — guitarist Chase Simpson, another guitarist named Josh Jove from Florida, and a drummer born and raised in South Africa named Sebastian Harris — all came from an earlier L.A. band named Automatic Slim before hunkering down and jamming and writing new songs. They imploded, walked away from the project, then later re-grouped with a lightning-rod of a bassist named Jacob Pillot, and that’s when things took off.

The Shelters and the Wild Feathers

It didn’t hurt prospects any that Jove and Harris had forged a connection with Tom Petty. He called them into the studio in 2014 to work on his Hypnotic Eye. The elder Heartbreaker returned the favor when he co-produced the Shelters’ debut. The music is a blast of missionary Brit Invasion-ish, bluesy simplicity with jagged indie-rock corners, a collection of fast little rock grinders that don’t stray very far from the harmonic footprint established long ago by the Beatles. I’d wager that’s what Tom Petty heard in the studio with the Shelters: a younger version of himself, a younger version of John Lennon.