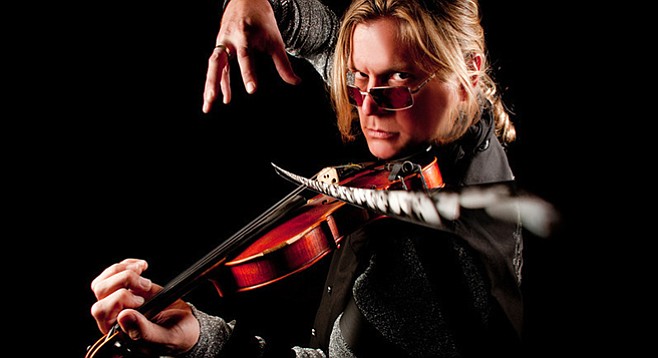 “I moved to San Diego from Philadelphia, and nothing really changed for me besides the weather,” says classically trained violinist Alex DePue. “I spilled out of the airplane with a suitcase and a fiddle and made my way to the Gaslamp District, right there on Fifth Avenue. I put on my old beat-up tuxedo, and began playing up and down the street until, finally, a gentleman invited me to come on into his restaurant, Asti Ristorante, whenever I wanted to perform as a strolling violinist from table to table. I played for dinner and tips.”

Now based in El Cajon, DePue began playing at age five and won his first university-level competition at ten. By the time he entered high school, he had already appeared at New York City’s Carnegie Hall, serving as concertmaster under the direction of Joseph Silverstein for the National Guild Youth Symphony.

“My music is very ‘fiddle’ oriented, but with emphasis on improvisation and arranging. More violinistic rock sounds are also favored within my recording projects and live shows. My goal as an artist is to demonstrate anything and everything possible on the instrument, and do so in a musical way.”

DePue first began garnering mainstream pop attention when his YouTube video performing a Yes song, “Owner of a Lonely Heart,” earned over a half million views, eventually landing him a slot with Steve Vai’s touring band, as well as opening for Yes at Humphrey’s in 2011. He has also toured and recorded with Miguel De Hoyos and Joe Satriani.

In addition to playing solo, in his own band, and with others, Alex and his brothers Wallace, Jason, and Zachary, play together in the DePue Brothers Band, which has released albums and recorded for NFL Films. “All are accomplished violinists, employed with major orchestras,” says DePue. “We began our careers together.”

The violinist recently shot a music video in Nashville with singer and multi-instrumentalist Rhonda Vincent, who played on his track “The Queen of Bluegrass,” planned for his upcoming solo album, Modern Paganini.