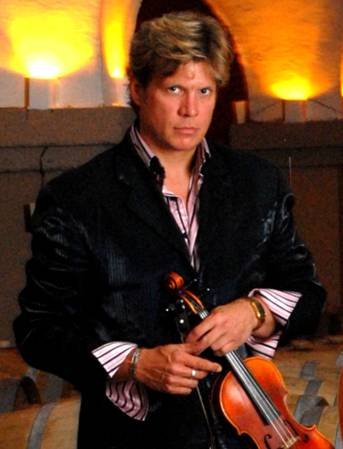 Classically trained violinist Alex DePue landed his first major rock star gig via a YouTube video featuring DePue’s arrangement of a Yes tune, “Owner of a Lonely Heart,” which has so-far scored over a half million views.

Guitarist Steve Vai caught the DePue video, made contact, and auditioned him. “I was auditioning violin players and I was petrified,” says Vai. “I was scared to death, when they started coming down, because nobody could play. I mean, there were these guys, these folks that could really shred. I mean they could play really fast and do all this stuff, but none of them had really good intonation or really understood the nuances of making a piece of music really sound like music. I started to think that my expectations were really unrealistic.”

“But then Alex DePue showed up, and I remember falling to my knees and thanking God. This guy just nailed it. I mean some guys are just gifted and, when he started to play, I heard his intonation and his ability to hear what I was doing and to respond to it, playing extremely difficult things with ease, and also playing light stuff.”

DePue began touring and recording with Steve Vai in 2007, as well as with Miguel De Hoyos, Joe Satriani, and others. He has multiple National fiddle championship titles under his belt, including the 2010 Judges Award and the 2011 Audience Award.

Alex and his brothers Wallace, Jason, and Zachary, play together in the DePue Brothers Band, which has released albums and recorded for NFL Films. “All are accomplished violinists, employed with major orchestras,” says DePue. “We began our careers together.”

In late 2017, DePue shot a music video in Nashville with singer and multi-instrumentalist Rhonda Vincent, who played on his track “The Queen of Bluegrass,” planned for his upcoming solo album, Modern Paganini.