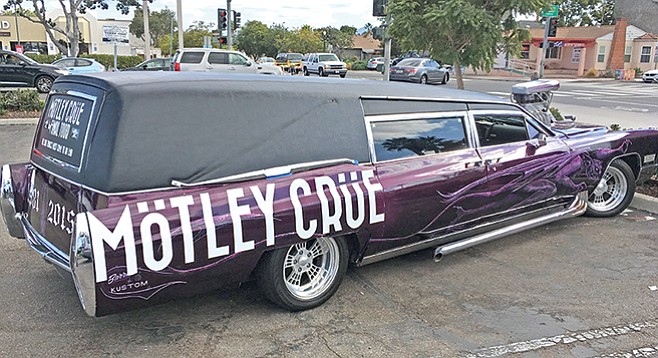 Then it's off to be auctioned at Scottsdale

The Kargoyle, a chop-topped 1967 Cadillac Miller-Meteor Funeral Coach of dubious practicality and somewhat mysterious origin, slunk and slithered its way into the Adams Avenue Vons lot in Normal Heights and parked next to me. “I just moved here,” said the driver when I asked if he’d like to talk about his remarkable vehicle. “Look it up online. It’s been all over.”

Yes, it has. The Kargoyle was created by Brett Barris, son of legendary car customizer George Barris. There it is on the Barris website, just below the classic Batmobile and right next to Jethro’s hot rod from The Beverly Hillbillies. But there is no mention of what it was made for, and neither Barris Kustom nor their public relations firm replied to a request for comment. (Several websites mention an 1980s movie titled Terror on Wheels — wherein the Kargoyle was trimmed with gold instead of chrome and sported chunky golden gargoyles on its hood and a tombstone on its bumper — but no such movie shows up on the Internet Movie Database.)

The Kargoyle’s new, airbushed look (complete with hydraulics) seems to have debuted in the 2006 season of The Girls Next Door, the E! reality show about Hugh Hefner’s trio of girlfriends and their life in the Playboy Mansion. It’s Halloween, and the girls — Holly Madison dresses as “Jackie Ho,” complete with pink pillbox hat — use it to take a Haunted Hollywood tour. Before leaving, Holly nixes a trip to Marilyn Monroe’s burial site, since Hefner plans to be buried right beside her. (Mission accomplished: today, Hef’s slab is marked with dozens of lipstick imprints.) But no one complains about the deep creepiness of sticking the three consorts of an octogenarian lothario inside of a hearse. Nor about Bridget Marquardt posing for a photo while lying on the spot where the Black Dahlia’s mutilated body was found.

Then, in late 2015, it served as a publicity car for Motley Crüe’s final concert. Re-named the Krüegoyle, it stopped at the Whisky a Go Go, the Rainbow Room, the Body Shop strip club, and other haunts mentioned in the band’s memoir, The Dirt: Confessions of the World’s Most Notorious Rock Band. Also mentioned: heroin addiction and overdose, personal betrayals, unhappy childhoods, broken marriages, drunk-driving fatalities, depression, suicide attempts, degenerative disease, stolen sex tapes, and my hometown of Cortland, New York.

For now, it can be spotted in and around Normal Heights, but maybe not for long. The website for Barrett-Jackson auto auctions lists it as Lot 1117 for its January event in Scottsdale. There is no reserve price.