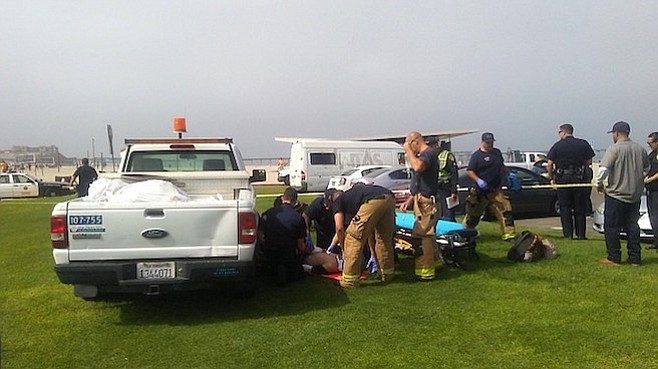 Suspicion as to whether victim sought to harm himself

A city Parks & Rec employee emptying trashcans in Ocean Beach on Saturday (August 26) accidentally ran over a man who appears to have situated himself under the truck on purpose. The incident occurred in the grass area along Spray Street, near the Dog Beach parking lot.

“Yeah, he went over him like a speed bump — not sure if it was both front tires or just the front right one,” an officer at the scene told me.

“The Parks & Rec employee backed up onto the grass to empty the trashcans,” the officer continued. "At the time he backed up, there was nobody in front of him.... When he was done, he started driving forward and there [was then] somebody directly under his truck — so in the time it took him to empty the trash. Most people would not lie down right in front of a truck, so we don’t know if it was intentional....

“I know this transient well. He does have some eye issues — he wears thick glasses, so maybe it's possible his perception of the truck... He thought it was further away? There is shade on that side of the truck. We just don’t know…. The traffic detectives and investigators are evaluating it for maybe a purposeful suicide attempt."

The man was transported to the hospital with non-life-threatening injuries, including a few broken bones.

Just a goddamned freeloading bum looking for an easy payday. I hope a rib goes through his liver.