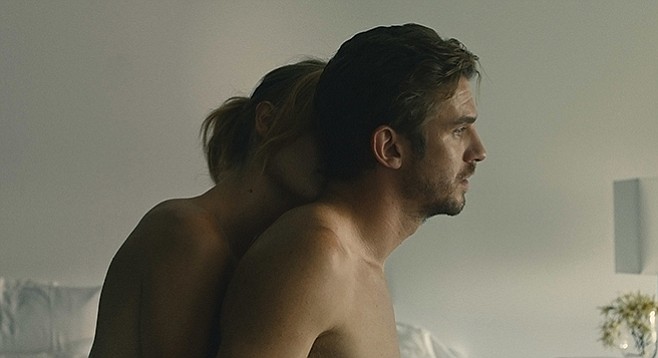 Ido Fluk’s a director, not a puppeteer

The Ticket proceeds with the deliberate, inexorable force of a fable

Director and co-writer Ido Fluk’s The Ticket stars a lean and hungry Dan Stevens as James, a blind man who recovers his sight and immediately sets his sights on the horizon. The way he sees it, he hasn’t been made whole; he’s been given the tool he needs to fulfill the vast and aching need he’s been telling himself (and God) he doesn’t have.

The story proceeds with the deliberate, inexorable force of a fable, but never abandons its characters’ humanity in the process. (God may not sympathize overmuch with James’s ravening, but the director clearly does.) Nor does it neglect the nuance in the dealings between James and those who knew the man before the miracle. (Fluk gets help here from a uniformly excellent cast, including Malin Akerman as a woman whose husband can see her for the first time, Oliver Platt as a blind man left wondering, “Why not me?” and Kerry Bishé as a tempting young lovely who is also a person.)

It’s an intimate film, stately but not staid, exploring the plight of a believer who doesn’t want to be a saint. Scored with controlled verve by Dany Bensi and Saunder Jurriaans.

Matthew Lickona: How did you decide on the title?

Ido Fluk: It comes from a story my dad used to tell me again and again when I was growing up, one of his stock stories. It’s about a man who prayed to God, asking to win the lottery. He prays for years and years and years, and finally, an angel goes to God and says, “Can we give this guy a break and let him win?” And God tells the angel, “I would love to, but the man has never bought a ticket.” Years later, I started thinking about it and what it meant, and then I made a film about it.

ML: The title of a film directs the viewer’s attention from the outset. Was it at all tempting to have it touch instead on the notions of vision and blindness?

IF: For me and my writing partner Sharon Mashihi, this wasn’t a film about blindness in the formal sense of the word. The film is about a blind man who regains his sight, but it could have been about a man who becomes famous overnight, or who wins the lottery. You hear about these people immediately going through a divorce, or filing for bankruptcy just six months later. I think there’s nothing more human than getting something big and then squandering it. Dealing with sight is another formal layer — it’s something we were interested in, but I would not describe it as a movie about blindness.

ML: Skipping from the start to the finish, I kept thinking, “This is going to be a hard movie to end.” Tell me about finding the ending.

IF: I think there’s a surprising element to it. At some level, the movie can be read — and has been read — as very dogmatic, a film that deals with faith and with the appearance of the divine in a man’s life. At the same time, it can be read as a very secular text, about a man who keeps trying to have a dialogue with high heaven, but nobody ever answers. I think the ending kind of crystallizes [that dichotomy], and sends people into that type of conversation at the end. It’s open to interpretation. I’ve been enjoying those discussions at the preview screenings.

ML: Talk about developing the prayer that James says throughout the film, the one about being satisfied with his life and with today, and not envying others.

IF: We live in an age where self-help and these speeches we give ourselves to pump ourselves up are very common. We wanted to write something like that, something between a prayer and a self-help tactic. It fits with the way he uses the church to advance his real estate goals; we wanted to show this blend of the secular and the religious.

ML: Speaking of secular and religious, you have a scene where James and his new girl are naked in bed together discussing belief in God, and I found it very striking. Especially the way she’s pressed up behind him as they sit on the bed; they’re so close, but not together.

IF: James comes from a world that is based on the sense of touch; it’s very warm and it feels like a womb, very intimate. Then he goes into a world that is cooler and more minimal. For me, it was interesting to put these two characters who are discussing faith and whether God is judging them in a space where they are surrounded by nothingness. Just the sparsity of the space, the white walls, not a lot of objects. Just a man and a woman surrounded by empty space, broadcasting what they’re thinking, where one is more involved than the other.

ML: We get that same space again later, when James breaks down and begs God. The camera never moves; just holds at a middle distance.

IF: When I planned this with Zack Galler, who shot the movie, it was important for us that the camera did not become a part of the story, that it didn’t rupture the intimacy. That we give Dan the space and seclusion he needed to give that type of performance. We wanted to keep the camera distant, and surround him with white space, so that the focus would be on him screaming up to high heaven. It was clear that this was a one-take type of performance, so we cleared the set and it was just me and Zack and then Dan just going at it.

ML: Do you direct facial expressions?

IF: Never. One of the benefits of working with actors like Dan Stevens, Malin Akerman, Oliver Platt, and Kerry Bishé is that your role as a director is not as a puppeteer. Your role is setting up a structure and an environment where they can work and make the choices they need to make. You get them to understand where they are in the world of the film, and then disconnect them from the constant minutiae of a film set. 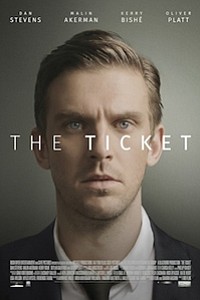 ML: I thought the film’s score was very fine, and played a role that music doesn’t always manage to play in shaping the way a scene came across.

IF: I had the great luck of scoring Danny and Saunder to score my film. They’re real artists, and we spent a lot of time searching for ways to use music in a way that was more than just an emotional support system for what is happening in the film. We wanted the music to start small and get bigger, to mirror the lust for life and the kind of pulsating drive that James gains once he regains his sight. And we implemented elements to show his unraveling. I think they used wooden blocks that sound almost like a woodpecker. Someone knocking at your head, making you almost lose it.