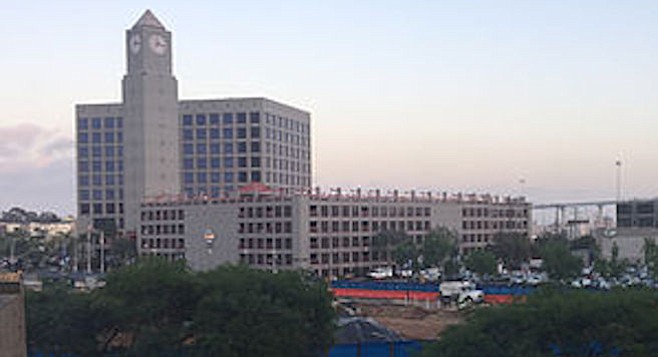 What time is it anyway? For commuters whose travels include a stop or a transfer at 12th Street and Imperial Avenue, time either stood still or twelve hours went by awfully fast.

The clock tower there has been offline so much lately that if you look up at it from one nearby corner, you might experience a sense of time travel. The timepiece that faces 13th Street and National Avenue showed 1:10 the other evening when it was actually around 8:30, and on Tuesday morning (September 20), time had leapt ahead at least 50 minutes, as the tower face then read 2:00.

Indications are that it happens off and on, though the other three clock faces on the four-sided tower have all been telling the right time.

Metropolitan Transit System spokesperson Rob Schupp writes in an email that "intermittent power outages" cause problems at the tower, but "for whatever reason" that quadrant "goes down, gets fixed and goes down again."

He adds that building management is unsure how long this has been going and continues to "troubleshoot."

The clock is a landmark next to the Mills Building and Trolley Towers, a hub for the county Health and Human Services Agency. It's also a key transfer point for the three trolley lines and the bus system.

The overpaid MTS CEO Paul Jablonski probably doesn't consider time management, on clocks or schedules, terribly important. But his yearly pay raises sure are crucial in his mind.