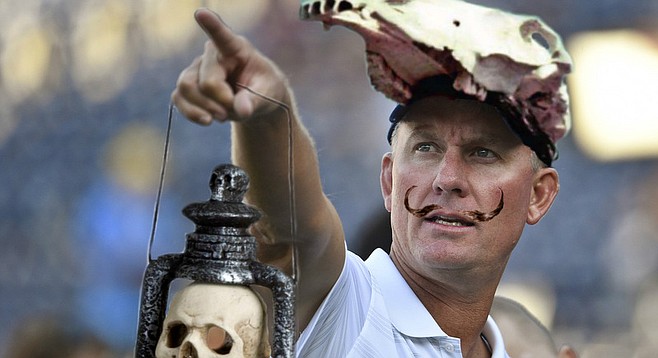 For several seasons now, the San Diego art world has held its breath in anticipation, waiting to see how Chargers coach Mike McCoy would seek to differentiate his approach from the performance art antics of his predecessor, legendary coach-provocateur Norv Turner. At long last, they can exhale. At a press conference held two days after the Chargers stunning opening day loss to the Kansas City Chiefs — at one point, they led 24-3 before ultimately losing 33-27 in overtime — Chargers chief of curation Henry Wanker announced that the proposed convadium would include in its design a dedicated gallery devoted to the artistic creations of the beleaguered head coach.

“Art begins in a wound,” said Wanker, “and I think we can all agree that Coach McCoy is pretty wounded these days. Maybe now all those troglodytes who have been blubbering their protests against our proposal for a combined stadium and convention center will begin to understand just how important it is for us to have this kind of multiuse space at our disposal. San Diego needs to see this work a lot more than it needs a division championship, and the convadium is the best way to make sure that it does. And as a special treat, I’ve arranged for a few of the pieces to be reproduced here, along with one or two comments from yours truly."

Redwalls. Wanker: “Easily the boldest and most original work in our initial exhibit. McCoy is rendering the game as it appeared in his mind’s eye, while simultaneously commenting on the interchangeable, replaceable, anonymous character of most NFL players. Only the Game is singular and significant: the players run together into an indistinct mass of flesh that has been brutalized for our pleasure. Their massive bodies join into a single nightmarish entity; some limbs stretching impossibly as an expression of the tremendous force brought by individuals acting in unison, others disappearing completely. And of course, there is the title, which compares these human souls to inanimate walls: broad barriers fashioned from individual bricks. But this kind of subtextual insight should not distract us from the brilliance of the surface, which depicts the Chargers’ fourth-quarter offensive collapse in dramatic fashion. Quarterback Philip Rivers has just completed a very short, very conservative pass in an effort to protect both his team’s lead and the ball, but as soon as the receiver turns upfield to run, he finds himself threatened by over half the opposing team. Six red jerseys stand between him and forward progress. His nearest potential blocker is actually behind him, dancing like a drunken Cossack. There is nowhere to go but down. A promising work from a coach who has, so far, not shown much promise."

With Thy Keenan Sword Impress. Wanker: “The title is a clear reference to Macbeth, which tracks with his use of the skull lamp. In the play, the mad king Macbeth, who cannot be harmed by any man of woman born, boasts to Macduff, ‘As easy mayst thou the intrenchant air with thy keen sword impress as make me bleed.’ And just as the keen sword cannot make any impression on thin air, talented receiver Keenan Allen cannot make any impression on the game’s outcome due to a string of injuries which seem as supernaturally unavoidable as the witches’ prophecy to Macbeth. McCoy’s collage technique here is blunt to the point of crudity, but that doesn’t mean it’s thoughtless. Allen is literally falling apart on the field: his ankle, his knee, his kidney, his collarbone. But not just Allen: the Chargers themselves, because of Allen. With him, they’re a top-5 passing offense. Without him, they’re a bottom 10. The receiver becomes a metaphor for the team, which needs all of its parts working together if it is to stand a chance.

The Persistence of Futility. Wanker: “Derivative, yes, but a masterpiece of derivation. Of course, Dali’s most famous painting is ,em>The Persistence of Memory, with its alarming melted clocks — if you’ll pardon the pun. McCoy counts on the viewer’s knowledge of that image when he references its title here, in what is clearly a variation on Dali’s terrifying religious work The Temptation of Saint Anthony. Perhaps we are meant to think of those clocks as signifying the runny nature of time, the way it slips through our fingers and runs away into a future we will not be around to witness. Sort of the way that time is running out for McCoy himself as coach of the Chargers. And why is time running away? See this painting’s title. Considering the theme. It’s hard to imagine a more perfect replacement for the desert saint who ordinarily occupies the lower right corner than rookie punter Drew Kaser, whose 17-yard(!) punt with two minutes remaining in the fourth quarter and the Chargers ahead 27-20 helped to set up the Chiefs touchdown that sent the game into overtime. And once McCoy has made that replacement, it naturally follows that he should replace the nude woman atop the lead elephant with the Lombardi Trophy — a fever dream of hot desire that is forever beckoning the team, but which remains forever out of reach. But it is also notable that McCoy does not alter Dali's rearing horse by, say, putting a Native American warrior astride it into order to make reference to Kansas City’s team name. Rather, he leaves it as it is because, despite this heartbreaking opening loss, the chief obstacle — if you’ll pardon the pun again — to a Charger Super Bowl trophy remains the Denver Broncos. He also leaves the second elephant’s spire intact — a symbol, no doubt, of a television broadcast tower: the source of football’s popularity, and therefore its power. But he does change the angel atop the third elephant’s golden whorehouse. An angel is a symbol of the divine, but the god here is of course money, and the whorehouse is the proposed new stadium. Who is the whore? It’s hard to say, mainly because the Chargers are paying my fee for this commentary."