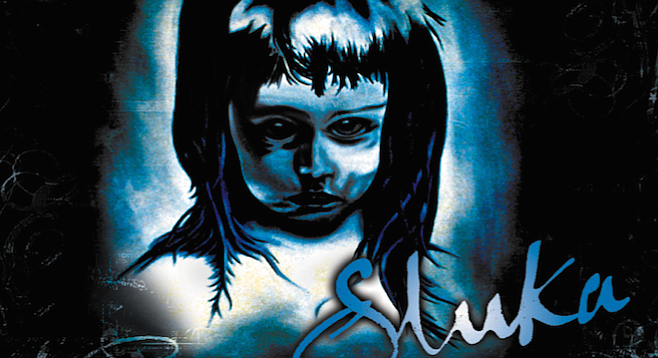 San Diego's "gothic cavalier" finds his bright side, sort of

Christopher Sluka, a San Diego resident and a singer/songwriter/musician most commonly cast as a goth rocker, has released an album, Introversions, that seems to be an effort to expand his horizons beyond a half-melodic philosophy of despair.

Yes, he sounds like Bowie in tone and texture (with an occasional nod to Bowie’s principle vocal influence, Anthony Newly); yes, his sound and lyric emphasis tend toward low tones, minor key accent points, and baroque emotionalism that bring the Cure, Bauhaus, and Peter Murphy to mind, but this is something different, it seems to me. Sluka sounds tired of the perpetual wallow in the depressive tar pit and remembers the durable tools of pop-craft: killer intro riffs; simple but compelling melodies with just enough odd turns; rich, evocative instrumentation; and vocals that catch the mood of the material.

Opener “Valentine Lies,” guided by pensive piano configurations and melodramatic beats, climbs from the ground up, with Sluka’s voice capturing the mood of a man giving himself over to the sweep of love. “A San Diego Zoo” takes a lighter, airier approach — strummed guitar and tasty, short guitar riffs, sweet bits of whimsy and regret, a man looking to move out of the dark house and into the sunshine of the spirit. Sluka’s voice, at once nasal, husky, but lithe, phrases the contradictions concisely. The final track, the catchy “Gothic Cavalier,” is the strongest song, with a bit of menace provided by chunky guitar chords, a persistent bass, and synth textures that overlay an engrossing if off-kilter melody. The closer swells at the chorus as Sluka relates the first-person tale of a man seemingly encased in a gloom he cannot shake, an observer unable to make lasting connections with “normal” life.

Sluka’s preferred mood is downcast, a stylized moodiness, the shared qualities of poets and assorted fans afflicted with swampy temperaments. What keeps me coming back to Introversions are the hooks, the riffs, the melodies. Sluka’s music here is catchier, his manner more searching, a man in a dark room braving a bit of sunshine.