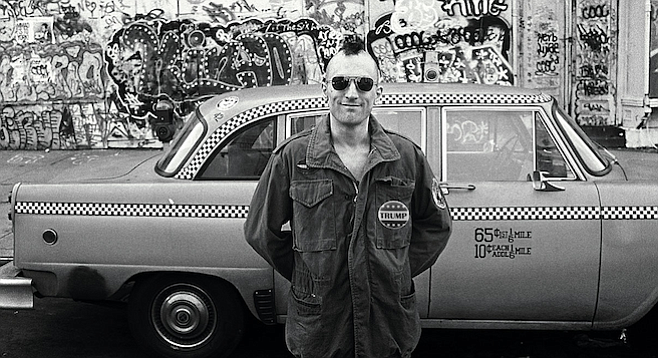 Taxi Driver is on the big screen October 16 and 19

And the Ken launches another stellar week of revivals

Listen, you screwheads, here’s a film that still can take it...a theatrical revival over 40 years after its initial release...a film that stood up...to the test of time...here is Martin Scorsese’s Taxi Driver.

Nothing before it could match its brutal honesty and hallucinatory presentation. The film hit with such force that it wasn’t until halfway through the 7 p.m. opening night presentation that I realized the 4:30 p.m. matinee had let out. It houses as much political and cinematic relevance today as it did the year it came out.

Those who’ve yet to experience it on a screen have nothing better to do than visit Edwards Mira Mesa, Mission Valley 20, Palm Promenade, or Regal San Marcos on Sunday, October 16, and Wednesday, October 19, when it screens at 2 p.m. and 7 p.m.

Taxi Driver is not the only classic to play town this month. Landmark’s Ken Cinema launches another week of revivals, and there’s but one stinker in the bunch. It had been over 50 years since I sat down and watched The Sound of Music in its entirety. The frames are alive with TV-safe compositions. Before it was over, I was cheering for the Nazis.

With Antonioni, Lynch, Cocteau, and Aldrich on deck, who needs Maria? I’ll have more to say about The Sound of Music on The Big Screen. In the meantime, mark your calendar or the rest of these outstanding revivals.

10/27: Robert Aldrich’s What Ever Happened to Baby Jane?