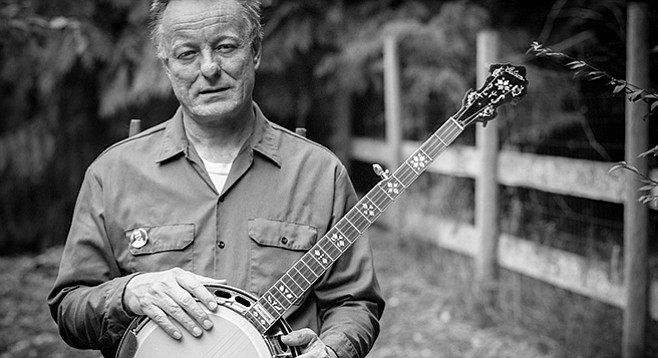 "Get It While You Can"

And now for some banjo love: many have tried to make that instrument cool and failed. Danny Barnes, 55, from Temple, Texas, claims to not be affected by the limitations of it. And there are many, including tuning, intonation, a dead-ish resonance, volume, and a particular repertoire listeners have come to anticipate whenever banjo is mentioned in polite company. Barnes is kind of a wild man, a former longhair backwoods hippie with a crowd of playing styles that are considerable. He can take it as deep country as you like on songs like “Shit Creek” or go right to a place where he sounds almost like Blind Faith or Dave Mason, only on five nylon strings instead of six metal ones. Almost.

Danny Barnes’s friends and associates say much about his approach to banjo and music in general. Paul Leary from Butthole Surfers, for example, produced his debut album with the Bad Livers in Austin in 1992. The Livers worked the metal-punk vein, heavy on the amplifier wattage and effects. They were known for Motörhead covers. A decade later, Wayne Horvitz, a renowned avant-jazz pianist, would produce Things I Done Wrong, Barnes’s tenth album to date. He’s also worked with Bill Frissell, Robert Earl Keen, Dave Matthews, keyboardist Chuck Leavell, Jeff Austin, and more.

Last year, Texas Monthly magazine published a feature titled “Danny Barnes Proves that Playing the Banjo Can Pay,” this after he won the Steve Martin Excellence in Banjo and Bluegrass award. Martin’s a known banjo geek, and the award came with $50,000 cash money, hence the article title. These days, Barnes lives near Seattle. Says he’s been playing banjo and dealing with the jokes since he was 10 or 11 years old. Barnes told a reporter he’s working on a suite for banjo and tuba and that he’d like to land up in Nashville someday. Imagine that — a banjo player in Nashville.