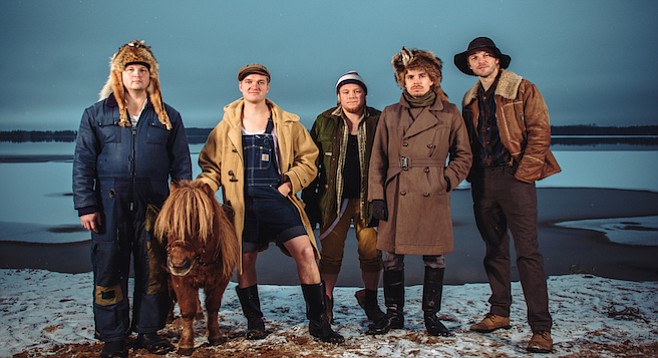 "Run to the Hills"

It seemed at first like another Internet prank: last summer, someone posted a video of a quartet of hillbillies out in the snowy woods, surrounded by farm implements and barn animals, playing on accordion, banjo, upright bass, washboard, guitar, and anvil. They looked to be making ready to launch into yet another version of "Dueling Banjos," but instead the band rocked an Iron Maiden tune. They appeared solemn during the short video; the five men cracked not a smile among them. They likewise sang the words quite earnestly, using those heavenly bluegrass harmonies that were patented (long before any of the five were born) by a bluegrass star named Bill Monroe. But the men are not really hillbillies from Appalachia. And neither are they rednecks nor moonshiners nor dirt farmers.

They are in truth a bluegrass band from Finland, and they call themselves Steve ’n’ Seagulls. The band members are Irwin Remmel, Pukki Kaalinen, Puikkonen, Hermann, and Wild Till Hiltunen, and they know many covers of hard-rock songs. Dio, Pantera, Led Zeppelin, Metallica, and AC/DC all get the bluegrass cure.

"Thunderstruck" went viral — 13 million hits on You Tube, and counting. And now, thanks to social media, Steve ’n’ Seagulls is on a fully merchandised and marketed world tour with a record deal and a full album set for release in the spring of next year; look for Farm Machine in May 2016. Yeah, it’s a novelty gig, and it seems likely they punked us and the whole business was planned, but listen, those slashing power chords on “Paradise City,” when performed on banjo with five-part vocal harmony, work in a whole new and unimagined way. The bluegrass machine likewise sells the story in “Run to the Hills” even better than the original Iron Maiden track ever could, and their “You Shook Me” could now play during a fundamentalist tent revival. Who’d have thought?