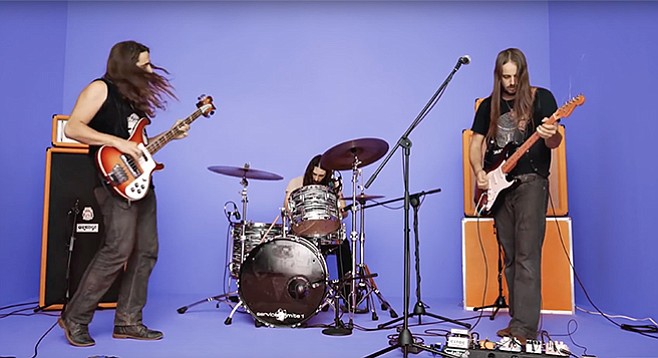 “It’s actually kind of strange how the band ended up here,” says Parker Griggs of Radio Moscow. The psychedelic-blues/hard-rock trio was founded in Story City, Iowa, before moving through Eureka and then Humboldt County. “Our drummer, Paul Marrone, met a girl from San Diego, and he moved out here with her,” says Griggs. “Then I ended up recruiting a new bassist that was also from the San Diego area...and my landlord at the place I was renting didn’t keep up on rent and the house was foreclosed, so I was forced to leave.”

With several albums (including their 2007 debut produced by Dan Auerbach of the Black Keys) and tours of Europe, South America, and even Russian dates already notched, Griggs is currently backed by locals Marrone (Psicomagia) and Anthony Meier (Sacri Monti). “I first lived near Vista, in the country, where we could rehearse. We had a jerk neighbor, though, who would threaten to fight us every time we practiced, so we had to leave. I ended up finding a secluded place in Alpine to live, where we can practice and record demos.”

Now a regular (both onstage and off) at Live Wire, Til-Two, and the Casbah, Griggs says, “There’s a pretty sweet scene here all of the sudden, [with] tons of bands digging back to the classics as an influence...it’s pretty cool how much things are taking off in the little scene out here. It’s all pretty well connected, too. That was the problem with Iowa, I couldn’t find anyone else that was into the music I wanted to play. There was always lots of indie rock and punk metal in Iowa, and not much else.”

Radio Moscow released their Live in California album in July, recorded at the Satellite in L.A. last December and featuring trippy power-prog originals reminiscent of area acts Joy, Earthless, Astra, Harsh Toke, and Brain Police (whose song “Gypsy Fast Woman” turns up in Radio Moscow’s live set). “We did a double LP because we wanted to have the vibe of those classic live double LPs from the ’70s,” says Griggs. “Seems like that idea hasn’t been touched upon since then, and we wanted to bring it back.” Radio Moscow appears October 15 at the Desert Daze music festival in Joshua Tree.