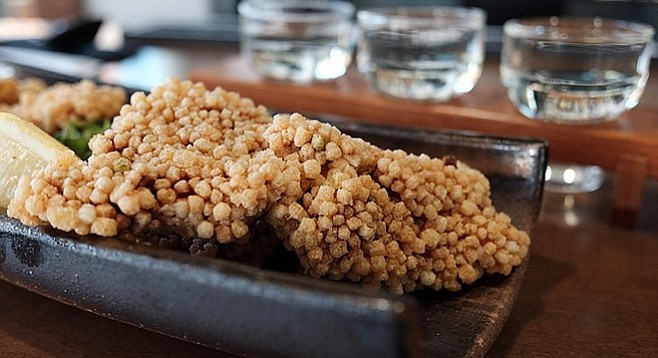 She’s to sake what a sommelier is to wine

Does San Diego need another ramen bar? I wouldn’t have thought so. But East Village’s latest, BeShock, won me over for several reasons, not all of them having to do with ramen.

Somehow the wide-eyed kitsch of the name BeShock reads more Japanese to me than actual Japanese names such as Tajima or Yamdaya. Ed Bedford recently discovered it’s taken from the word bi-shoku, “the beauty of food,” or what Google less poetically translates as “gastronomy.” 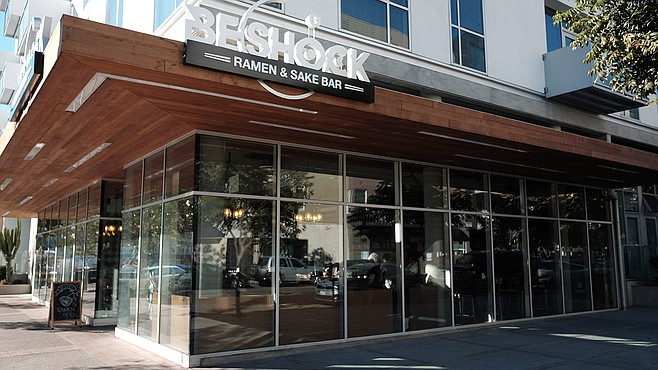 East Village gets another ramen bar, and it’s worth it.

The beauty of BeShock’s ramen exceeds its curly noodles and tender chashu pork. Vegetable toppings play a bigger role here than most ramen spots with the likes of spinach, shredded leek, and bok choy available in addition to the usual bamboo, bean sprouts, and wakame seaweed. The amateur nutritionist in me appreciates the chance for a better-balanced dish. There’s even creamy vegan ramen featuring snap peas, broccoli, and tofu and a gorgonzola ramen with prosciutto and avocado. I couldn’t quite bring myself to try the latter, but I did try the tantan ramen, a spicy sesame take that had some legit kick to it best soothed with a selection from the sake bar.

BeShock founder Ayaka Ito is most likely San Diego’s only certified kikizakeshi, which is to sake what a sommelier is to wine. She brings some serious sake knowledge, including a large map beside the bar explaining the difference in sake styles produced in different Japanese prefectures. You can also browse a booklet offering detailed tasting notes of the better sakes behind the bar. Craft beer fans take note — these come from small-batch producers, the equivalent of our independent local breweries.

Of course, the best way to learn about the differences is to taste. I ordered a $14 tasting flight, and Ito set me up with three distinct options: one she described as fresh, one aromatic, and one closer to traditional style. Assessing the differences was enlightening. At just a month or so in business, this place already attracts a crowd, so if you’re interested in tapping Ms. Ito’s sake expertise, look for a slow time to visit. I found her guidance worthwhile, with my favorite of the bunch the fresh junmai sake called Kuzuryu, a nine-headed dragon.

I didn’t want to drink sake on an empty stomach, and for this visit I skipped ramen to try a different dish that had been catching my eye on other peoples’ plates: a karaage chicken fried with a sort of rice crispy crust. Ito credits the tender white meat inside on marinating the chicken breast in koji, a key sake-making ingredient that breaks down rice into yeast-digestible sugars. The koji pairs the appetizer well with sake, but that crisp rice crust really makes the fried chicken dish stand out in look and texture. It’s a little much for one person to eat alone, so grab a friend or two, share some chicken, and learn some sake.