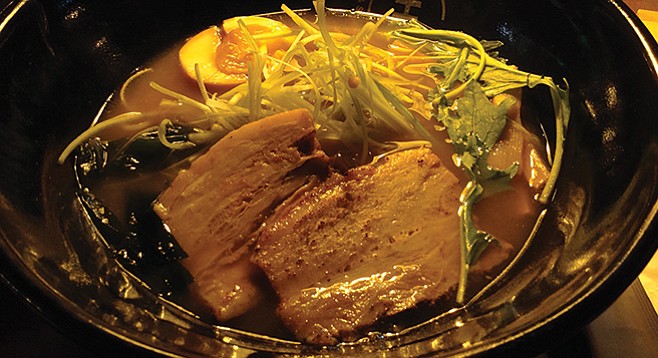 “Drink out of the corner or you might get some...spill.” Too late.

Am I seeing things?

Like, I notice a gal at the entrance of a crowded eatery, speaking Japanese, and giving elaborate bowing farewells to two customers. We’re near 13th and Market. A sign says “BeShock Ramen & Sake Bar.” It’s part of a new condo construction.

Wow. This means — another new ramen place? (I was at Yamadaya last month.) Now I’ve got to see. I head inside, ask the welcome desk how long they’ve been open.

I go sit up to the bar. It’s bricky, decorated basically with overhead rows of different sake bottles.

“We live right above you,” says this guy to the barman as he and his lady grab a couple of stools. “Just moved in.”

Fact is, I’ve been keen to try the ramen experience again ever since that dee-lish pork belly ramen I had at Yamadaya. I wonder how this stacks up.

“Welcome,” says Jason, the server. “Something to drink?”

Fact is, I’ve got the hots for hot sake.

“We have about 30,” says Jason. “Maybe you need to speak with our sake master.”

And a moment later this gal, dressed in black tee and baseball cap like everybody else, turns up at the counter holding a glossy drinks menu. Lord. Dozens of sakes. Each is described like a fine wine. Like Dewazakura Oka Cherry Banquet. “Soft feeling on the tongue…floral rather than fruity…touch of pear, and perhaps melon.” That one’s $10 a glass. Or Kuzuryu Nine-Headed Dragon (“Light-bodied yet beguilingly full-flavored”), $9 a glass.

I end up going for Akitabare, $8 for a glass. “Its subdued, understated refinement evokes a sense of the northern province where it is meticulously brewed.”

Turns out the gal is Ayaka Ito, sake master. One of the owners. 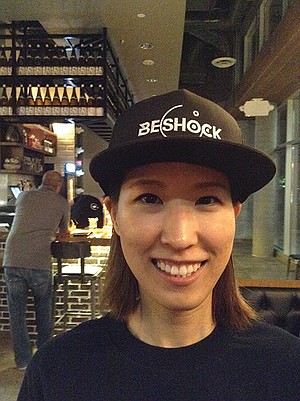 Hmm. Okay: Let’s talk food. I check the one-page “soft” menu. They have a dozen starters that run from $7 to $13. The $7 one is dashimaki egg. “Fluffy egg is filled with tasty dashi broth.” Seems dashi broth is like a stock you’d use in miso soup. The pork chashu (braised belly) bowl plus seasoned egg, green onion, and sauce goes for $9. Then there’s BeShock Buns, with “homemade pork chashu,” $8. Sushi rolls start at $6 for the California and top out at $13 with the La Jolla Roll (with ikura — salmon eggs — seared salmon, avocado, cream cheese, sliced radish).

But no. Ramen’s the name, ramen’s my game.

“The tonkotsu is our signature ramen,” says Ayaka. “I went to Kyushu, in the south of Japan. It is famous for tonkotsu. But theirs is more heavy, concentrated. We have made our tonkotsu mild, lighter. Blend the two cultures. Japanese, Californian. Like we use lots of local San Diego vegetables.” 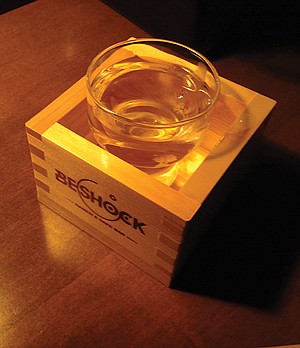 The glass in the box: presenting sake the traditional way

The barman brings out a little square pinewood box. He places a liqueur glass inside it, and starts pouring my Akitabare into it, then over it, even as it overflows, until the box (“masu,” says Ayaka) half-fills up around it. It’s considered a gesture of generosity.

Oh yeah! Now I remember. The box is the traditional way of drinking sake, from the days when sake was made in wooden barrels. I pour my glassful into the masu, even though Ayaka says today’s purists don’t use the box to drink from anymore, in case the pine wood affects the flavor. No problem for me.

“Drink out of the corner,” says Ayaka, “Or you might get some…spill.”

“I wanted to open my restaurant in San Diego because there were no good ramens here,” says Ayaka. “New York has 100 ramen places. Ramen is like Japan’s soul food. But it has to be good. I brought three chefs from Japan for this.”

Ayaka was born in Nagoya, Japan, but grew up in places such as Canada. Then when the Great Eastern Japan Earthquake, as she calls it, hit Japan, she went with United Earth organization to help out. Worked with kids, old people, even keeping the seaweed industry going.

“Every morning, I would be boiling and stirring ten tons of seaweed. There were no workers!”

Irony: there, among the earthquake, tsunami, and nuclear ruins, is where she discovered eastern Japan’s rich sake tradition and decided to study to become a certified Sake Master. That’s like a sommelier of the sake world. She passed. “Now I want to be a missionary for sake, as well as ramen,” she says. “The professionals here know wine, beer, but not so much sake.”

I suddenly realize: the sake I’m drinking is cold, not hot.

“Sakes are so much better quality now. They used to heat the sake to disguise its less-sophisticated flavors. We don’t need to do that anymore.”

So, how about this ramen dish compared to Yamadaya’s? For sure, these guys seem to be going lite on the tonkotsu. For me, Yamadaya’s was lusher, more intensely flavored.

But, hey, what do I know about ramen? Aside from those good old desperation-day 20-cent Maruchan Ramen noodle soup packs from Albertson’s?