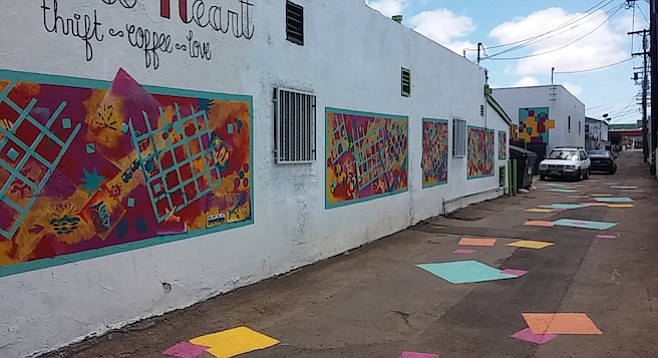 "If we can reclaim them it creates a ripple effect through the neighborhood."

City Heights residents worked to take back the alley behind the Humble Heart Thrift Store on El Cajon Boulevard last weekend, transforming a space crammed with junk and hidden behind barred gates into the beginnings of a community gathering space.

"Alleys are such under-utilized public spaces," said Avital Aboody, who organized the effort. "If we can reclaim them it creates a ripple effect through the neighborhood."

A group of students from High Tech High School in Chula Vista designed, built, and painted the new plant-friendly “anti-walls” that shape the space, using colors that continue from murals painted on the alley walls and floor. 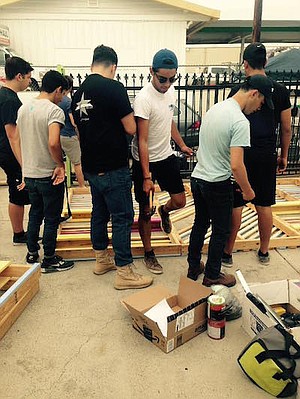 "We found a teacher who had a group of seniors who need a community project."

"We found a teacher who had a group of seniors who need a community project," Aboody said. “We started with a palette of colors and an area, then we surveyed people in the community to see what they wanted and figured out how to do it cheaply and with recycled materials."

“Alley activation” is an urban movement that has taken hold in older and poorer areas, since they tend to be short of parks and public spaces. Aboody was involved in alley activations in Logan Heights, where she says such efforts have made alleys safer.

"You need to engage the community because once they feel ownership, they keep the space and improve it, and it improves the entire neighborhood," one planner said.

The High Tech High students had prepared stencils to print on the dull back walls of the building and had pre-cut wood to build the living walls, which have plant boxes built into them. The organizers also found a ping pong table on Craigslist to add to the area. Humble Heart owner Mike Modrow said he welcomed the effort.

"I believe in giving,” said Modrow. “We want to do more with the alley so it's a true community gathering space."

The effort began last year, with local artist Vicki Leon's murals that traveled into what was once a dangerous alley. The idea of turning the alley from an eyesore into a community center picked up steam this year, Aboody said. 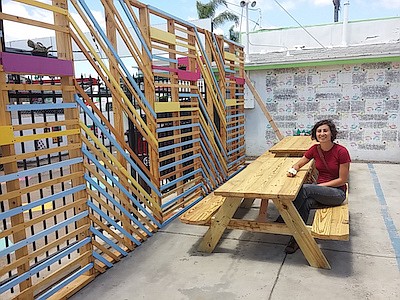 She had already been talking to Sterling Tran, who runs the City Heights Coffee House, about setting up a second venue. Now Tran is putting a coffee cart in the newly reclaimed and decorated space. She hires people who are having a hard time getting started in the job market and she is in the process of hiring a second new employee to work at the new space behind the Humble Heart.

Modrow said they're also going to set up a snack bar so kids have snacks and juices while their parents have some coffee.

"We're open to ideas from our community,” he said.

If alleys are cleaned up where will the druggies and dirtbags go?