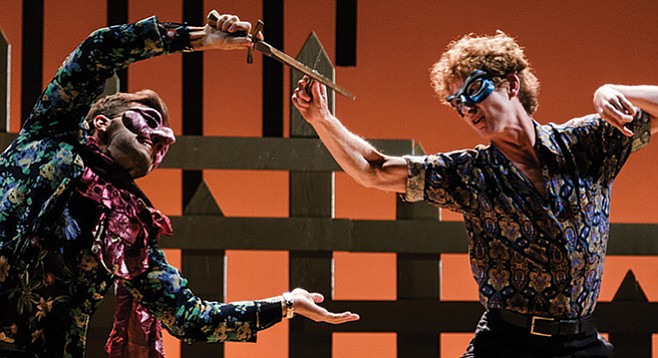 The Venetian Twins would unravel pretty quickly in real life.

“I just can’t tell the man I intend to marry apart from his twin brother,” said no one, ever.

At least, not in real life.

Nowhere is it written that comedy ought to be more realistic. In fact, were comedies bound by common sense and reason, they would end up being sad and depressing. But, among all the ridiculous comedy tropes, mistaken identity appears joyfully absurd, and cases of mistaken identity abound on San Diego stages of late.

No sooner has The Metromaniacs closed at the Old Globe, than UCSD’s graduate theater program opened a short run of The Venetian Twins (directed by Jesca Prudencio), Italian Carlo Goldoni’s 1747 mistaken-identity play based on the Roman, Menaechmi. Astute viewers may recognize a nonincidental similarity to The Comedy of Errors, as Shakespeare drew heavily on the Roman original.

I have a friend who used his twin brother’s passport to enter Mexico for lunch, and “twin swaps” apparently do happen, but I suspect that the prolonged confusion between twin brothers as portrayed in The Venetian Twins would unravel pretty quickly in real life. This may be why modern mistaken-identity tales utilize more complicated means by which said identities are ultimately mistaken.

Consider The Big Lebowski. It’s somehow more believable that two men with the unusual name of Jeffrey Lebowski could be confused with each other in the metropolis of mid-'90s Los Angeles. Perhaps modern writers assume audiences have become too skeptical to accept Renaissance foolery, demanding a more cunning deception to suspend their disbelief. The laughs at the Mandell Weiss Theatre during The Venetian Twins would suggest otherwise.

The truly impressive takeaway here is that a film like The Big Lebowski, or even something older, like The Great Dictator, can be seen through the lens of history as the heir to a comedic tradition dating back to ancient Rome, and probably earlier. It’s easy to forget that, but refreshing to be reminded of it.