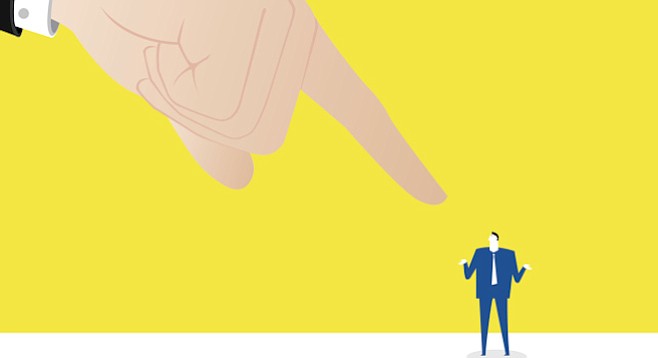 Opening a can of name-and-shame Facebookworms not recommended

To out or not to out social offenders

Despite “we only serve water upon request” signs at most restaurants, I’ve noticed that compliance with water-saving regulations has slipped of late at some of my favorite spots. Servers are starting to automatically drop water glasses at tables again. I assume they got sick of every table requesting water, which forced them to make separate trips.

This bugs me because a) I want to save water in time of drought, and b) I don’t like ice in my water, so when automatic water comes with ice, I don’t want to drink it. If I sent it back, I suspect it would get dumped out, which would be the worst-case scenario.

I don’t want to name names yet, but I’m torn because I want to do something about it. Should I give it the old online name-n-shame? Should I just call the relevant authorities on these places? That seems harsh, but I don’t know what to do.

Facebookworms peruse the eponymous social medium to the exclusion of real life happening all around them. Facebookworms digitally burrow into the media giant’s data banks to steal succulent, profitable information. Finally, there are cans of Facebookworms, the likes of which can be opened by naming and shaming, which you should avoid at all costs.

Twenty first-century hipster smugness — derived from a sense of being oh-so-right about things such as pet ownership, listening to vinyl, and consuming organic food — may seemingly entitle us to bend the massive power of the greatest communications tool the world has ever known to history’s most noble calling; i.e., the outing of social “offenders” via pithy, smirking status update missives. I share your commitment to progressive ecology, but I would urge against effecting change through public ridicule. A measured phone call to the general manager, made well before the hectic rush of dinner service begins, will allow you to share your grave concerns over the state’s water supply.

Being a socially conscious hipster in a consumer’s world is no mean feat. When your primary social power is where you spend your money, then you must imbue that choice with as much value as possible. You can best decry wasteful water practices by going elsewhere for your fill of truffle fries and grass-fed burgers.

As for tipping off the authorities, I would imagine overzealous restaurant water-glass filling sits somewhere in the bottom second percentile of enforcement priority. Don’t waste your time or theirs.