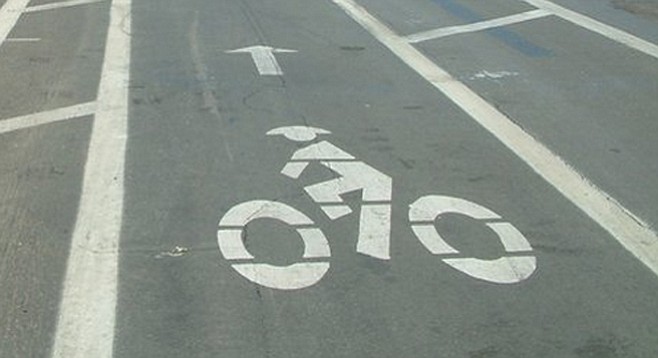 Bikers can take a hike

Little Italy's Business Improvement District prefers to preserve parking spaces rather than allocate street space for bike lanes through the heart of the district.

In a February 23 letter to business owners and residents, Little Italy Association's Luke Vinci and Thomas Cervello informed residents of their opposition to the Downtown Mobility Plan, a transit-oriented and pedestrian-friendly set of guidelines proposed to reduce greenhouse gases and promote walking and cycling in San Diego.

At issue for the Little Italy Association is a proposed protected two-lane bike path on Beech and State streets.                              Vinci and Cervello say adding the bike path would direct cyclists through "high-traffic freeway intersections" of Grape and Hawthorne streets. It would also ruin the long-awaited prospect of changing head-in parking on Beech Street to diagonal parking, which would add an estimated 50 parking spots to the area.

The association isn't against cycling: they propose adding protected bike lanes on Pacific Highway as the north-south route and on Ash Street as the east-west cycling choices.

                     "The proposed [Downtown Mobility Plan] cannot move forward as it is currently recommended by Civic San Diego staff," reads the letter. "In an effort to create safe connectors for our downtown and visiting cyclists, we ask that you voice your support for the [Little Italy and Little Italy Residents Association]-approved alternative...tracks on Pacific Highway and West Ash Street."

If the alternative plan is accepted, cyclists would have to pedal around Little Italy on dedicated bike paths instead of taking more direct, yet less safe, routes into the neighborhood.

The preference of parking over bike lanes is seen in other parts of the city as well.

In Hillcrest, a plan to close a small stretch of University Avenue in order to promote increased walking and cycling into the business core was met with staunch opposition. And while both sides have since agreed to consider alternatives, residents and business owners in Hillcrest and Mission Hills continue to place more importance on parking over pedestrian-friendly modes of transportation.

The Uptown Community Parking District has stood firm in opposing any plan that removes parking in Hillcrest.

Resistance to such infrastructure changes, say cycling advocates, jeopardizes safety and moves the city further from achieving goals set forth in the city's Climate Action Plan, which makes it a priority to take drivers out of cars and put them onto buses and bikes.

Cyclist and Bike SD boardmember Paul Jamason is among those asking the city to put its foot down and support the Climate Action Plan.

"While street parking is very important," says the letter, "there may need to be some parking loss to accommodate other transit modes. In addition, existing street parking resources are not being maximized in Uptown, where additional parking meters, demand-based pricing, and extended meter hours have all been delayed."

Representatives from Civic San Diego and the city will continue to appear at community meetings for input on the Downtown Mobility Plan. The council is expected to consider the plan within the next few months, after public review is complete.

Another option would be for Little Italy to embrace a big part of its sporting history and greatest athletes all while making itself more "Itallian" than any row of parked cars ever could...ok maybe if there were all Ferrari, Alfa, Maserati, etc.

Interesting note...The oldest bicycle manufacturing company is Bianchi from Italy and they have been producing bikes for over 130 years.

As a very long time cyclist and also a lover of on street parking, I support what Little Italy is doing since the number of cyclist are small despite what the Pro-Bike lobbyist (that are supported by Big Developers and others) say. San Diego and especially its older, soon to be Historic, neighborhoods needs to stop trying to push for ever more bicycle lanes that are going to be used by a small minority of those that move about San Diego on bikes. Seniors, those that cannot use bicycles and all those that wish to use vehicles of all types need to be able to have equal access to SD roadways.

This push to revamp our roadways is similar to businesses extending their serving "footprint" into what has always been the sidewalk by erecting barriers so that they can expand their business while making it even harder for pedestrians to walk on the now much narrower sidewalks.

We need to ask who is going to benefit from all these changes and if it is not the majority of us, then we need to say No Thank You.

Seniors and non-traditional cyclist are seeing new options in E-bikes. If you're fit and alert enough to safely drive a car then a electric bike could be another option to look at.

I like to bike. I ride quite a bit but when I'm on the street I don't feel a full dedicated lane is really necessary. I think the 3-ft. rule is sufficient. Cyclists just need to use some common sense. That dedicated bike lane going up Fifth Ave. from downtown to Hillcrest is a complete waste. I'm much more put out by the lack of parking than I am about not having enough room on the road for me and my bike. I went to do my weekly shopping at Trader Joe's at the Uptown Plaza and after driving around for 20 minutes looking for an available parking space, I gave up and went over to Park Blvd. to Sprouts. I see cyclists coming and going everywhere with no problem finding a place to park and lock their bikes. If there has to be a lane for bikes, 3 feet is plenty. The phrase was always, "Share the road." When did it become "This road is not big enough for both of us"?

Quote: "I went to do my weekly shopping at Trader Joe's at the Uptown Plaza and after driving around for 20 minutes looking for an available parking space, I gave up and went over to Park Blvd. to Sprouts. I see cyclists coming and going everywhere with no problem finding a place to park and lock their bikes."

Well, sounds like you're pointing out there are too many cars in San Diego for the infrastructure? Not sure where you propose we build the new parking lots either...

A business in San Diego should not bank on city provided street parking for their survival. If you open a restaurant in little Italy without a parking lot then you've made a conscious risky choice in your business location. Besides the article doesn't mention if it's 2 parking spaces being lost or 100. Would that data affect anyone's opinion on this?

Most cities the size of San Diego dedicate 30% of all available land mass to guess what, parking lots. All for cars that sit idle 95% of the time. Cyclist aren't really asking for much in comparison..