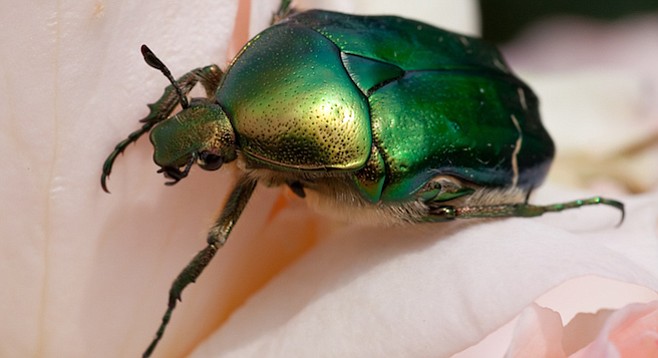 Desert explorers should take along enormous quantities of water

The Heat of Summer will most likely reach its feverish peak in inland San Diego County during the coming month — July. (Coastal San Diego is different: since its weather is greatly affected by the slowly warming mass of ocean water adjacent to it, coastal temperatures usually peak in August or September.) The weather station at Borrego Springs commonly measures midsummer highs in the 110s Fahrenheit (the record high is 120.3 degrees, a reading set on June 27, 1990), but certain locales in the low-lying, barren basins of Anza-Borrego Desert State Park — notably the Borrego and Carrizo badlands — probably experience even higher temperatures. Overnight camping in the desert in summer is relatively carefree. Little or no shelter is needed and early morning temperatures are delightfully tepid. Prospective explorers of the desert in summer should take along enormous quantities of water and inform a responsible person of their whereabouts.

Magnolia, the southern-U.S. native commonly planted as a decorative street tree in many of San Diego’s older neighborhoods, continues to bloom this month. Its grandiose description in some botanical books as the “queen of the flowering broadleaf evergreens" accurately gauges its oversize, white, pleasant-smelling flowers.

June Bugs are emerging as summer’s warmth is finally upon us. The green June beetle only one of some 300 species of scarab beetles found in Southern California, flashes a metallic green underbelly as its buzzes about erratically. The mature scarabs flying about have spent at least a year underground in larval form munching at the roots of lawns or your favorite ornamental plants.