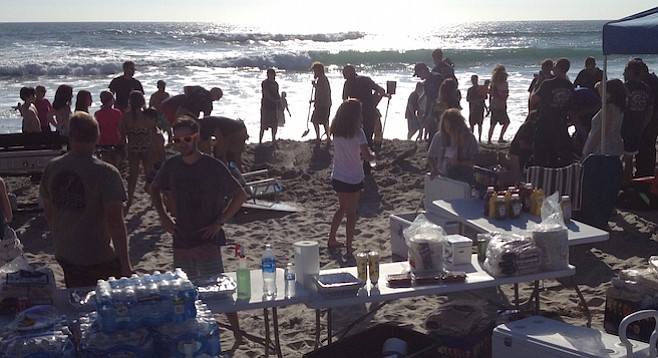 At 5:30 p.m. on Thursday (June 16), Cardiff by the Sea lifeguards at Tower 11 responded to a report of a boy buried in the sand on Seaside Beach. Two boys were digging big holes with a tunnel in between when the tunnel collapsed.

One boy, around age 12, was trapped, buried above his head. Lifeguards put out the 911 call, and 11 units responded, including three fire trucks and two paramedic units from the Encinitas Fire Dept., as well as additional lifeguards.

“The boy was under for less than two minutes,” said state-beach lifeguard Sgt. Sean Homer.

After the boy’s rescue, all the firefighters shoveled in sand to fill in the large hole.

The boy was with a large group of about 100 from the Cross Connection Church. Paramedics gave him a clean bill of health at around 6:00 p.m. and released him. The group prayed together after the boy was rescued.

“It's fine sand and could collapse at any time,” Sgt. Homer warned future beachgoers who might want to dig.