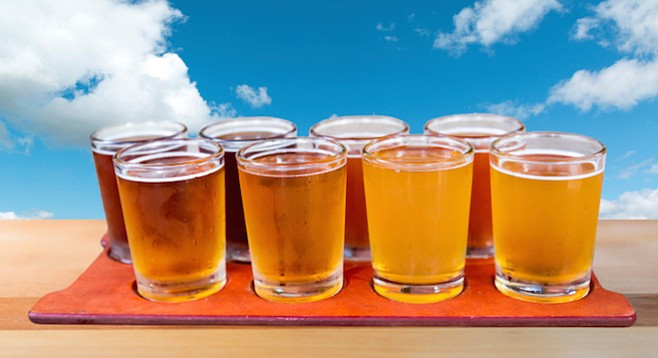 Lagunitas moving into San Diego...sort of

To serve nonprofit beer in an "amazingly beautiful building"? Whaaaat?

Amid reports Petaluma, California-based Lagunitas Brewing Company has purchased stakes in three smaller, independently owned craft breweries around the country, comes the news it also plans to establish a presence in San Diego.

According to the Lagunitas website, the company plans to open what it calls a "Non-Profit Fund Raising Community Room" in San Diego in January 2017. Lagunitas spokesperson Karen Hamilton declined to say in which neighborhood of San Diego the space will be located, pending contract approvals. However, she did call it "An amazingly beautiful building."

Founded in 1993 in the Northern California town of the same name, Lagunitas joined the ranks of longtime craft breweries subsumed by larger beer corporations when it sold a 50 percent stake of the company last September to 143-year-old Dutch brewing company Heineken International for an estimated $500 million. (This valuation preceded the sale of Ballast Point Brewing Company to Constellation Brands for $1 billion two months later.)

On the surface, this does not appear to be another 10 Barrel situation. Oregon company 10 Barrel Brewing, owned by the world's largest beer conglomerate AB InBev, stirred up local controversy in January when it announced intentions to open a brewpub in San Diego's East Village, thereby directly competing with local craft-beer companies on their own turf.

Hamilton said the planned Lagunitas property will not operate as a brewery or taproom, but strictly as a fundraising venue. "It will only be used for nonprofit fundraisers put on by 501c3 organizations to raise money for their causes," she said. "We will not rent the space out, it'll be provided to the nonprofits free of charge." Lagunitas beer will be served at the events, in benefit of the nonprofits.

Though it does not currently plan to produce beer in San Diego, Lagunitas has been aggressively expanding to other cities. It opened a second brewery in Chicago in 2014, and is currently building what will be among the nation's largest production breweries, in the Los Angeles suburb of Azusa.

While these expansions preceded the Heineken sale, this week Lagunitas founder Tony Magee announced the company has purchased stakes in Austin, Texas-based Independence Brewing Co. (note the irony) and in Moonlight Brewing Company, a 24-year-old brewery out of Santa Rosa, not far from Petaluma. Lagunitas has also acquired a stake in Charleston, South Carolina's Southend Brewery and Smokehouse, which will reportedly be converted to a Lagunitas-branded brewpub.

Along with San Diego, Lagunitas will open a fundraising community room in another West Coast craft brewery hub, Portland, Oregon — this slated to open in August of this year. Magee said the intention is to "Connect with, learn from, and support local communities."

Hamilton points out that Lagunitas locations in Petaluma and Chicago have been operating as fundraising centers two nights a week, providing the model for the Portland and San Diego locations. "What we've found is that this is an excellent way to become rooted in our communities, to really understand what is important to the people there."