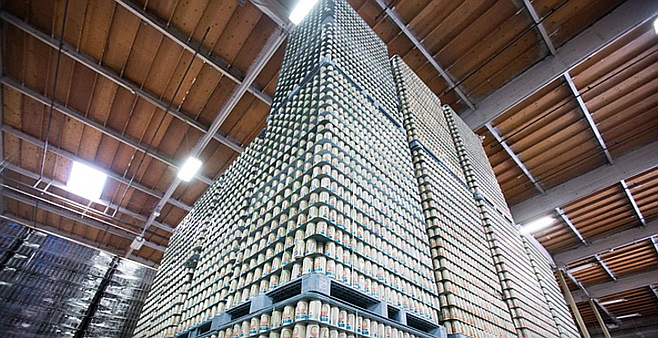 The San Diego beer scene is seeing dollar signs this week with the announcement that Ballast Point sold for a whopping $1 billion. The buyer is Constellation Brands, a multinational beverage conglomerate that deems itself "the world's leading wine company." Its dozens of wine brands include well-known Robert Mondavi, Ravenswood, and Clos du Bois.

It's also the third-largest beer producer in the U.S., though until now its beer portfolio has been craftless, composed entirely of Mexican brands Corona, Modelo, Pacifico, and Victoria.

It's quite the trajectory for Ballast Point, started by a small group of homebrewers nearly 20 years ago. The company had recently filed with the SEC to pursue an estimated $172.5 million IPO, but that seems like chump change in retrospect. 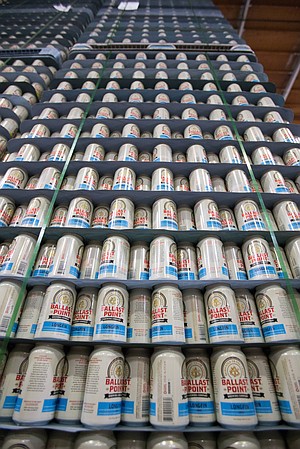 The billion-dollar price corresponds to the worth of another California craft beer entity, Lagunitas Brewing Company, which sold a 50-percent stake to Heineken for $500 million in September.

As with Lagunitas, and Miramar's Saint Archer (now a part of MillerCoors), the Ballast Point team insists neither brewing personnel nor recipes will change. According to Ballast's Facebook page announcement of the sale, "We will continue to be a stand-alone company, brewing the beer that we like to drink with our team in place."

In a press release, Ballast Point reports an anticipated 2015 sales increase of "more than 100 percent versus calendar 2014." Founder Jack White suggested the sale was motivated by an urge to continue growing the brand. In a statement, he lauded Constellation's "proven track record of helping successful premium brands reach the next level of growth and scale."

The size of the investment certainly suggests Constellation will push the brand far and wide. Ballast Point expects to sell four million cases of beer in 2015, or roughly 290,000 barrels. Considering the Wall Street Journal's estimation of a brewery's worth to be at $1000 per annual barrel, the billion dollar price tag exceeds that by more than triple. It's basically $13.89 per pint brewed in 2015 — a pretty good deal for Ballast ownership.

And it might make room in the local market for some smaller craft breweries. Fan reactions on Ballast Point's Facebook announcement were largely negative, suggesting local drinkers will stop drinking its beers. One commenter responded, "I hope the access to new distribution networks makes up for the loss of loyal craft beer fans."

Another pondered, "As a local San Diegan and long-time supporter of your brewery, why should we continue to support Ballast Point and not other local craft breweries like you once were?"

Other commenters ranged from more direct to blunt, adding, "Ballast Point will never be in my fridge or cooler again," and, "Fucking sell outs."

Thus far, other local beer companies have remained pretty quiet about the sale. However, Modern Times did issue a typically playful tweet, highlighting the idea Ballast Point's most popular beer, Sculpin IPA, will share corporate stewardship with another high profile Constellation-owned beverage: "Tonight, we'll drown our sorrows in tasty Manischewitz and/or San Diego's leading IPA, both brought to you by the same folks. Crazy times!"

Can anyone still see them as a craft brewer when they're pumping out four million cases of what seems to include canned beer? That's craft brewing? I don' theenk zo, Senor.

When these mega-bucks takeovers/mergers occur, there's always a public announcement that "nothin's gonna change, folks." About 98% of the time, that's a lie, although the liar may not realize it at the time. But then, there's the statement that the founders/owners are doing it because they want to make the brand/label/chain grow. They always say that, but they know they're lying about that. They want to cash in, and when something like this genre of brewing is hot, hot, hot, it's time to rake in the dough.

From the standpoint of the employees who weren't fortunate enough to be owners too, the line about "brewing the beer that we like to drink with our team in place" was intended to reassure than that their jobs will go on, and on, as before. Good luck with that guys, especially when those conglomerate types want to see the profitability take a great leap upward.

Before leaving the topic, I agree with the fans who are swearing off the stuff forever. It is a sellout, which I suppose is the essence of capitalism. But they no longer need to participate. there are many, many new craft brewers up here along CA 78 that would love to have their business.

I don't want to believe in a world without Grapefruit Sculpin. It's time we faced the fact that a big part of this beer we all love, is the business. Ballast Point has gone and done what they think will most benefit the beer, as that is the most important part. Yes we all got comfy and have enjoyed this fun little craft beer community that has grown up around these businesses. Now, one of our favorites has made the big time, and now is not the time to turn our backs. We need to continue to show our support so that Constellation can not force changes upon the products we love. If the quality in the beer changes then we all lose, we lose our favorite beers and Constellation loses the billion dollars they invested into Ballast Point. I will continue to keep the faith and I will take all these breweries at their word, big beer has to be seeing the light, we as beer consumers are no longer content with the bland watery lagers that were the norm for entirely too long. We have come to understand that Beer=Flavor and there is no going back. The best way for the big companies to grow is to show their support to the good companies (a.k.a. Breweries) like Ballast Point, Saint Archer and Golden Road, and take their popular products and expand the distribution, keeping the product the same. Because it is the beer that is the important part, the flavor that has become so popular in San Diego and L.A. is bound to catch on around the country and around the world. I will continue to be a fan until the beer suffers. Ballast Point's motto is "Dedicated to the Craft" I for one want the dedication to continue and if they are as business smart as they claim then Constellation will have to want this as well, they own more wineries then breweries and I am certain all of the wine does not taste the same, so why should we automatically believe they will change the beer we all love. They are counting on us as a fan base to continue to support the beers we love, we can't give up just as things are beginning to grow again. It has taken Ballast Point 20 years to get to this point, they have only grown to the billion dollar mark with our love and support, they still need us, and I still need them.

If you want your BP beer, by all means continue to buy it. If you and others like you stop buying it, they might stop making it, or at least making the type you prefer. But don't confuse "support" for BP with convincing a conglomerate to leave the operation untouched. At the least, there are federal laws that require these businesses to offer uniform benefit plans to the employees in all of the extended corporate entity. If Constellation doesn't treat its workers as generously as did BP, then the BP folks will see a change that they don't like.

You might like to think that these conglomerates always do the "right" and astute thing with their acquisitions. If you read the business/financial press, it reports daily on plans gone awry, buyouts that flop, arrogant CEO's who lead their companies into ruin, and a host of other ills. In fact, it often seems as if only a tiny fraction of acquisitions and mergers really help the participants, their products, or their customers.

I'm old enough to remember how the big corporate brewers, Anheuser Busch, Coors, Miller, Schlitz and a host of others seemed all to engage in a "race to the bottom" during the 70's and 80's, taking the taste/flavor out of their beers, and inventing those abominable "light" beers. Until this micro-brew and craft brewing revolution came along, I stopped drinking most beer, save for a few of the better Mexican labels, and a couple from Holland and Germany.

We shouldn't "automatically believe" this new owner will change the beer. It may not, but don't be surprised if the stuff does change and not for the better.

For most privately owned companies, going public and offering stock in an IPO is a milestone to set up. There are number of reasons for companies to go public you can read them here in detail https://preipopros.com/ However, attaining finance and reducing debt are the basic reasons for company to offer stock to the general public.