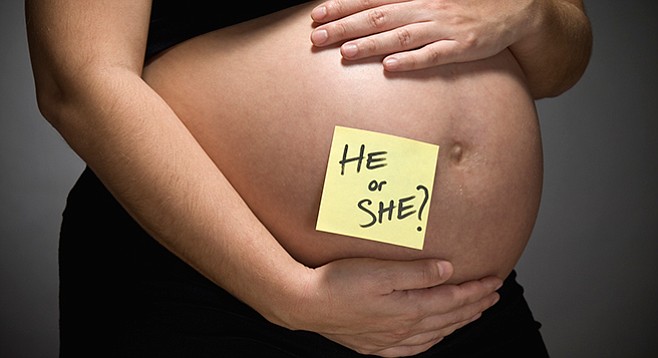 SneakPeek says it can determine the sex of an unborn child

Mothers say it is as reliable as a coin flip

On March 21 of 2014, a San Diego–based company named Gateway Genomics applied for incorporation in Delaware. Ten days later, the company filed for a trademark for its product, called SneakPeek. 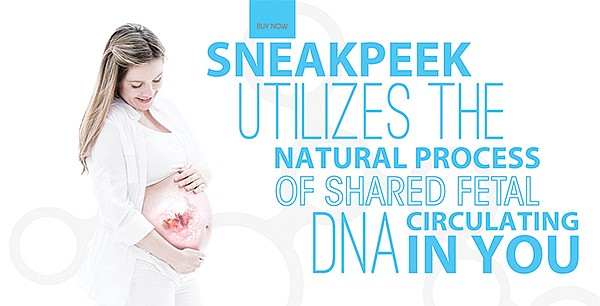 I found that “SneakPeek” describes the company itself, not just its product. It is extremely difficult to sneak a peek at Gateway Genomics, even after days of sleuthing. The company is being sued for deceptive trade practices, violation of consumer laws, unjust enrichment, violations of the California business code, and other sins. According to the suit, filed December 29 in federal court, Gateway Genomics has set up elaborate roadblocks to make sure unhappy customers can’t get their money back easily or complain on the company’s Facebook page.

Others can’t get to the company either, I found out.

Gateway, under the brand SneakPeek, peddles a home prenatal gender test that permits a woman, only nine weeks pregnant, to predetermine the sex of her baby by pricking her finger, getting a slight amount of blood, and sending it to a laboratory. She allegedly gets her answer in five to seven days for $79 and within 72 hours through the FastTrack option for $149, according to the company’s promotions.

Normally, a baby’s early gender predetermination may require a large amount of blood that a phlebotomist draws via needle. SneakPeek is a breakthrough, bragged Gateway in August of last year at a meeting of the International Society for Prenatal Diagnosis. (Gateway is not a member of the organization, which says it knows nothing about the company, other than that it made a presentation.) Gateway says its researchers have discovered a new source of fetal DNA circulating inside the mother’s bloodstream that is available in a pinprick’s worth of blood. 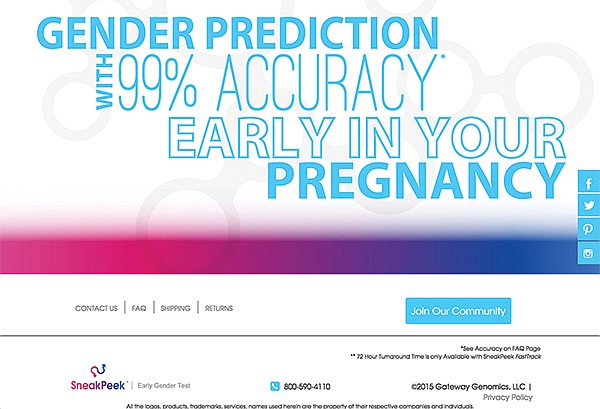 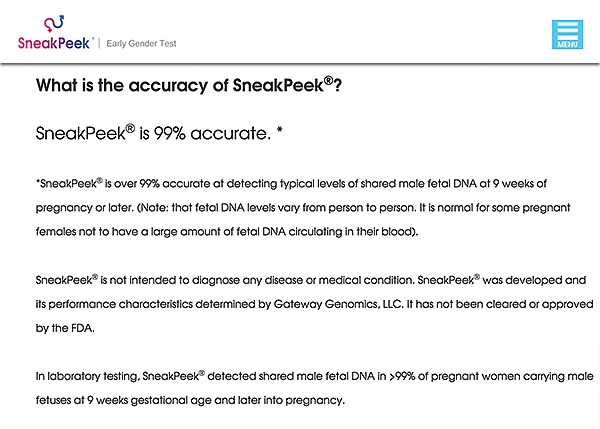 Gateway advertises that SneakPeek is 99 percent accurate. Oops. Read carefully. There is a tiny asterisk next to that 99 percent claim. The asterisk directs one to FAQ (Frequently Asked Questions). There one will find these words: “(Note:…It is normal for some pregnant females not to have a large amount of fetal DNA circulating in their blood.)”

Hmmm. Does this mean that SneakPeek is 99 percent accurate only for women who have a large amount of fetal DNA circulating in their blood? If so, what is the percentage of accuracy for all pregnant women? (For some reason, the lawsuit does not get into this possibly damning Frequently Asked Questions hedge, and the law firm, Los Angeles–based Kristensen Weisberg, would not answer my questions.)

According to the suit, a putative class action, one group of women has a Facebook site called “SP Sucks.” These women state that SneakPeek got so many negative reviews online that it had to stop selling its product on Amazon. It appears to be back on Amazon, but Amazon did not answer my questions.

The plaintiff is an Ohio woman who allegedly paid $169 for the FastTrack test last year. She was promised that the test could determine the sex of her unborn child before any sonogram could do so. A few days after she sent in her blood sample, she was told by email, “Your SneakPeek Results Are In! Congratulations. You are having a baby girl!” She gave birth to a boy. Others tell a similar story, according to the suit.

Says another woman, “Don’t try to write anything on their Facebook page because they will BLOCK you.”

Gateway/SneakPeek certainly has set up a wall that blocks people from getting information. The company has been incorporated for almost two years, but it is not listed in the directory of the San Diego Biotechnology Network.

CONNECT, the San Diego organization that spurs innovation and is greatly supported by and very close to the biotech community, has never heard of Gateway Genomics or SneakPeek. Claire Bula, senior director of marketing and communications, was helpful in my search for the company. “We don’t know anything about them, nor have we had any contact with them,” she says. She adds, “They likely don’t want to be found,” and Steve Hoey, another top CONNECT official, agrees.

The company is not listed with the California secretary of state, although firms doing repeated intrastate business are supposed to register. Directory assistance has no phone number for the company.

Gateway has sent out news releases listing Laura Hart as the public relations specialist. But the telephone number Gateway lists for her goes to a recorded pitch for SneakPeek. The company gives an email address: [email protected] I emailed several times asking for basic information. I got none but was told that “the company stands behind its product” but doesn’t discuss pending litigation. I sent another email asking if the company sells into the sex-selection abortion market. I got no response.

The recorded pitch for SneakPeek also provides an email address to get in contact with a sales representative. I emailed several messages, saying I wanted basic information about Gateway — its founders, chief executive, phone number. I got no response.

I called Jordan Bolton, who supposedly does graphic design work for Gateway. He refused to tell me anything about the company. I emailed Maggie Yamin, supposedly the project coordinator for new business development of Gateway, and didn’t hear back.

I called Paul Amon, San Diego lawyer who handled the legal work on the trademark. He would give me no information, citing attorney-client privilege. I emailed him some questions, which he sent on to the company. When I called him back to see why I had heard nothing from Gateway, he said, “Honestly, I would recommend that they don’t answer you because of the ongoing litigation.” I have not received answers.

Through an intermediary, I got a LinkedIn message to Laura Hart, the public relations and marketing project coordinator at Gateway. I asked for basic information and, hardly to my surprise, heard nothing.

It looks like another biotech scandal lurks. On December 30, Pathway Genomics, another testing company, agreed to pay the federal government $4 million for paying kickbacks to physicians. Several years ago, Sequenom, which does prenatal testing, was ordered to stop giving false information on the success of a test for Down syndrome.

The mother can decide the gender with or without a weenis if she doesn't know the difference. A lot of the confusion is enforcing stereotypes. They won't stick to a picture in the womb that may or may not see definition.

shirleyberan: But SneakPeek claims it can determine the baby's sex after only nine weeks of pregnancy. Best, Don Bauder

When I had my girl I saw what they determined was no penis.

shirleyberan: Yes, but how far along were you in pregnancy when that picture was taken? Best, Don Bauder

I think back in 1991 they checked for a tiny appendage by ultrasound a couple of times 4-6 mos. Still weren't sure till she popped out (with inducement) after 2 weeks late.

Probably don't want to be sued when the child identifies in child relationships as one or other. Too soon!!!

Unprotected and neglected having sex without maturing first.

Don - can't remember what it's called but they stick a large needle in around the baby to get fluid for tests (is not needed) that can itself result in a fetus aborting. Didn't do it (UCSD SD). Used the epidural and went very painless. Had to understand when to push without the feeling though.

Ponzi: How well does it work? Best, Don Bauder

The test is very accurate but there are some serious risks. The test can result in birth defects and even miscarriage. It's usually suggested for couples who have had a birth defect in a prior birth or a family history of birth abnormalities.

Ponzi: San Diego-based biotech Sequenom got in deep trouble for claiming that its test for Down syndrome was more accurate than it was. Best, Don Bauder

We're born human. Isn't that definition enough to start and learn about the person? Don't need a waist of time (possibly harmful depending on needle procedure) test at all.

When I was born they pulled me out by my . . . and pulled everything else up short.

AlexClarke: Who was the mother's ob/gyn? Best, Don Bauder

I was a breech birth and ever since I've been an a$$hole.

Ponzi: We at this website would never describe you that way. You submit well-researched items. Best, Don Bauder

In this culture, anyone who tells the truth and/or is smart, is considered an a$$hole.

Flapper: I don't consider myself smart, but still I get called that. Best, Don Bauder

Well, more than the 51 percentile.

Flapper: How about the bottom 10 percent? What do we get called? Best, Don Bauder

CEO's. And other euphemisms.

Flapper: I have never been a CEO -- and that includes at home. Best, Don Bauder

I was trying to settle in my mind what happens in infant reassignment when either parent or doctors have expectation but characteristics are ambiguous and probably happens more often than we are aware of. It is human rights abuse to assign a gender to interest people (hermaphrodite). Intersex - WIKI

shirleyberan: There is a lot of information on transgender people these days. Best, Don Bauder

Interest was supposed to be Intersex which is apparently a new term.

shirleyberan: I haven't heard "Intersex," but I don't read about sexual identity questions as much as other people do. I would rather read treatises on economics. Best, Don Bauder

Flapper: I assume that treatise (if that is what it is) uses the term "Intersex." Best, Don Bauder

To an economist, such treatises are equivalent to sex.

Flapper: Decades ago, an economist was defined as a man who would marry Elizabeth Taylor for her money.

Flapper: Unfortunately, Liz Taylor was not my aunt. My aunt was the spouse of my uncle. Best, Don Bauder