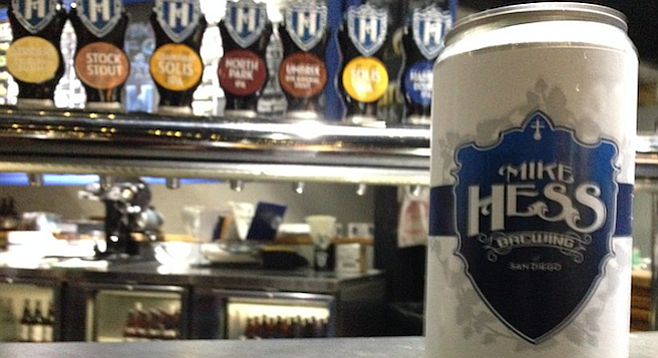 A giant can of beer to go

A couple pints at home with a growler alternative

A few months ago, I started hearing about breweries adding a new alternative to growlers in their tasting rooms: giant beer cans. Basically, a beertender fills a topless 32-ounce can straight from the tap. Then, using a sort of reverse-can opener, seals a lid to the top of the can so it's ready to go home and into somebody's fridge.

Coronado Brewing has them, and I think some Ballast Point locations do as well. Mike Hess was the first to tell me about them. At his brewery, they call them Purrowlers, and he says beer will stay fresh in such airtight cans just as long as it would in a keg — roughly three months. I'm not one to leave a beer in my fridge that long, so I can't speak first-hand to the longevity promise.

However, I did recently have occasion to appreciate the convenience. Driving home at the end of a long day, I found myself craving a fresh beer but too tired to drink it anywhere but from the comfort of my couch. If I'd had a blank growler in the car, I could have stopped any number of places for a fill-up. (California law used to prohibit breweries from filling growlers that weren't labeled with their specific brand. That's no longer the case, so many breweries now fill blank growlers, or growlers where the branding has been obscured — the Brew Project handily made the list of San Diego breweries that will do this.)

Not having a growler with me, grabbing a Purrowler seemed like an easy alternative, so I passed by the Hess brewery and tasting room in North Park. I lucked out with parking, and made it in and out of the shop in less than five minutes with a freshly poured and sealed can of Brunus robust porter. Eight bucks for two pints of the 7.4% ABV beer.

I've never had a bad beer at Mike Hess. Seeing as I've visited the place nearly a dozen times and never tried the same beer twice, that's a pretty outstanding accomplishment. Technically, I have ordered the Solis IPA more than once, but the recipe of that one changes every time they make it — I think they're up to version #52 now.

Otherwise, I'm always interested in trying whatever's new or seasonal, confident it's going to taste right, with no unintended flavors. If it's a traditional beer style, I safely assume it'll be representative of the style. That was the case with this robust porter, which tastefully meets most of the guidelines established by the Beer Judge Certification Program for the porter subset. In other words, it had a roasty dark malt character, some light caramel and rich chocolate notes, with a low hop profile and no fruitiness to speak of. Immensely satisfying.

Sticklers for such guidelines might note it runs a little stronger than the suggested 6.5% limit. But I'm no judge — I just wanted a bold, flavorful porter to take me home. Conveniently, I got it.