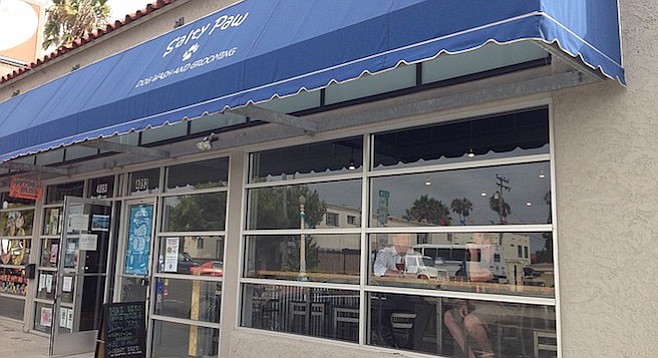 The brewer, originally based in Miramar, added this third location just a month after celebrating its fifth anniversary in grand fashion at its larger North Park brewhouse. While that vast tasting room offers split-level views of brewing equipment, outdoor seating, a food-truck bay, and collection of board games, the new O.B. spot keeps it smaller and simpler. While company founder Mike Hess says he hopes to arrange for food to be brought over by neighbors O.B. Noodle House and other nearby restaurants, the main goal here is bringing another beer source to the beach.

"We liked the idea of being in a beach community and wanted to be in the right spot," says Hess. He seems to have found it. After signing the lease on the new tasting room, Hess wound up moving to the neighborhood himself, adding, "The kids are loving it and my wife and I are digging it."

"I love the fact they're trying to be community-involved," says Zack Brager, O.B. resident and co-owner of California Wild Ales (a barrel-aging beer company that expects to open next year). He heard about the new Hess tasting room from friends and neighbors who were invited for free pours given to locals the first night of its soft-open. 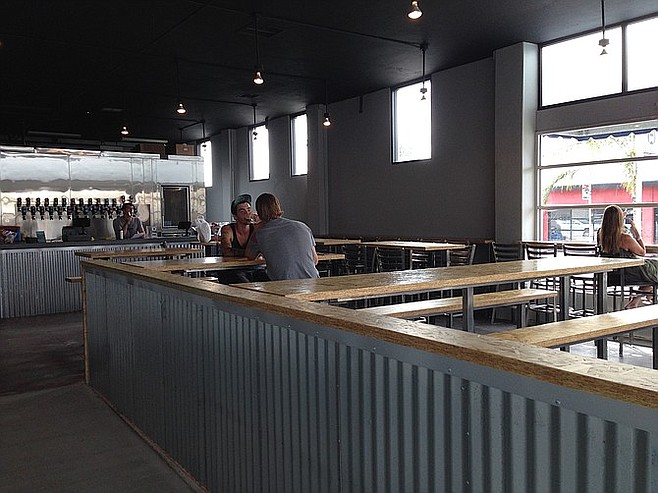 Some work to be done on the windows and walls, but the taps already work to spec.

Before a September 25th official opening, the dog-friendly space will undergo more improvements than just replacing the sign. Roll-up windows will replace the bay of panes around the northwest-facing corner so drinkers at the outwardly facing counter seating will get some ocean breeze along with a view of Obecians cruising the sidewalk (until then, the room stays cool thanks to air conditioning).

Already available are a new MHB offering they're calling Purrowlers — essentially 32-ounce cans that act as growler replacements. A small machine seals the lids onto the cans immediately after pouring, so no light or air can get in to corrupt the beer. Therefore, a fresh pour keeps for longer than it would in a traditional growler — as long as it would in the keg — and customers aren't charged extra for the vessel.

One last bit of work before the tasting room is complete: artwork to dress the currently bare walls. Hess says screen-printed designs by Hess Brewing 's Chief Art Dude, Court Patton, will be up soon. In the meantime, he's in the process of looking for an O.B.-based artist to paint a mural on the outside wall along Cable Avenue.

There are two dirty little secretes involved with the establishment of this tasting room in Ocean Beach.

First, the property is located in a CC-4-2 zone. This zone permits alcoholic beverage outlets as a limited use subject to a Conditional Use Permit. A Conditional Use Permit requires that every resident within 300 feet be given written notification of the proposed use, a hearing held of objections, and a process available for appeal.

According to the City of San Diego Open DSD the new Hess tasting room does not have a Conditional Use Permit. This is a violation of the 14th Amendment of Constitution guaranteeing the due process of law to Ocean Beach residents.

Second, qualifying microbrewery tasting rooms that do not prepare food on premises are exempt from local Health Department permits.

This means that dog friendly, kid friendly, food truck friendly microbreweries like the new Hess tasting room are exempt from San Diego County Health Department's sanitary inspections of restrooms, dish washing facilities, dining rooms, or anywhere else on premises that a patron may be concerned with bacteria, mold, and vermin.