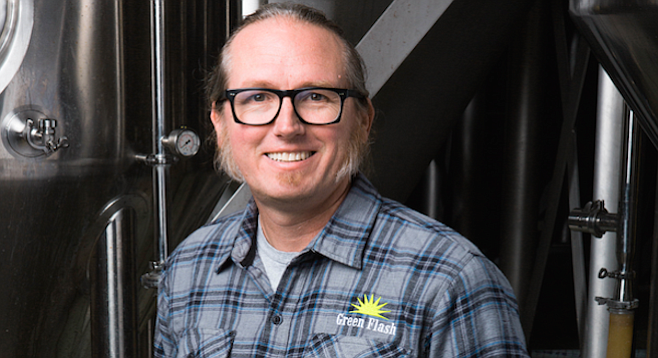 Within minutes of Chuck Silva's resignation as brewmaster of Green Flash last September, owner Mike Hinkley promoted head brewer Erik Jensen to the position. It was a tremendous vote of confidence for Jensen, suddenly entrusted with the legacy of the first San Diego craft brewery to expand distribution to all 50 states.

Meeting Jensen, it's obvious where this confidence comes from. He's got a calm, confident demeanor and strong communications skills. His brewing experience goes back more than two decades, much of his career spent in leadership roles. "Every brewery I work for I end up being the guy who's in charge of everything," Jensen recalls.

A member of the first class to graduate from the American Brewers Guild back in 1994, Jensen's first gig was as intern at Berkeley's Golden Pacific Brewing Co. He started out washing kegs, then quickly worked his way through most of the jobs in the brewhouse.

He moved to San Diego and took a job with Karl Strauss in 1996, working as head brewer until 2002. Over the next ten years he ran couple of brewpubs. Then, in 2012 Jensen joined Green Flash, which is on pace to produce 100,000 barrels this year. So, while being in charge isn't new to the veteran brewer, the way he spends his days has definitely changed.

Most of his work these days involves managing budgets and schedules of a 30 person brewstaff, plus designing a second brewhouse for Green Flash's expansion to Virginia Beach. "When you work at a brewpub, you can kind of do whatever the heck you want," Jensen says. "There's not really a huge risk." Not so with a large production brewery, where up to 500 kegs are brewed at a time, and beer releases are plotted a year in advance.

"There's a lot of conscious decisions made when designing beers now," he notes. While Silva's West Coast IPA recipe put Green Flash on the craft beer map, and helped globalize the concept of its aggressively bitter style, Jensen says his approach to new releases will reflect a beer landscape where nuance has come into favor over boldness. "That might be a tack that I take," he says, "going for one of these beers that's not aggressively bitter but still has a lot of hop flavor."

He dreams of making a dry-hopped lager, a hoppy wheat beer, and a kettle sour. Jensen and team develop recipes on a five-barrel pilot system, which are served in the Green Flash tasting room long before getting a bottle release. Consequently, Mira Mesa is currently the best place to sample the new brewmaster's work.

Some of Jensen's first national releases will continue Green Flash's Hop Odyssey series. Over the course of 2016, this variety of single-hop ales will explore the flavor profiles of Styrian Golding, Pacific Gem, and Nugget hop varietals. "It's not only going to teach us something about those hops," he says, "but hopefully it teaches the people who are drinking them."

And possibly a little about the guy making them.