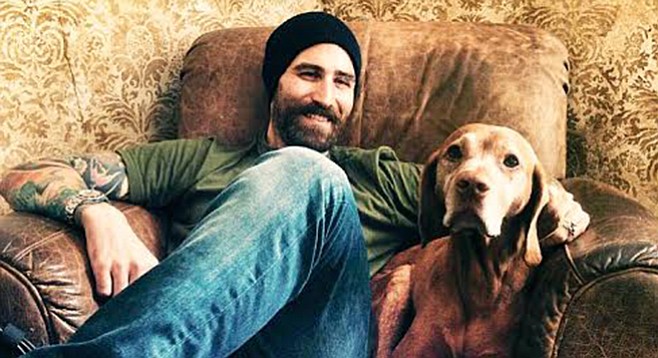 San Diego singer/songwriter hangs up his rock and roll costume

Last summer, San Diego singer/songwriter Itai Faierman had a new band and a new record. Critics called the band (Speaker in Reverse) his best effort yet. The six-piece delivered a lean, stripped-down song collection that was surely Faierman’s most commercially accessible work to date. It was yet another head-to-toe reinvention that confused some fans as to who exactly was doing the singing. It was Faierman, but sporting a spare falsetto. It was beginning to look as if the Israeli-born musician had finally struck music-industry gold.

...by Speaker in Reverse

But later, in the fall, he called each member of the band and told them that he was putting music on an indefinite hiatus. “Nothing changed,” Faierman tells me, “and everything changed.” He’d recently moved back into the Sweetwater Zen Center in National City (Faierman lived there once before after he first moved to San Diego during the early 2000s), and he’s since started a series of daily writings and Zen meditation posts on Facebook. “I try to write one a day.” Of that ah-ha moment in which Faierman realized he no longer cared to make music?

“An insight is an insight. It’s the unfolding of it, the day-to-day. I still play music at home. I have an acoustic guitar. But the difference is energy. Now, there’s no effort. Before, it was a different energy — deliberate and intentional.” He pauses, then says, “I started making music when I was 17. That’s a long evolution of self.”

Faierman has since put his energies into writing and his day job, which is as a special education teacher in San Diego city schools.

“I just finished writing a second book, which I’m not releasing for a while. It’s only 20 pages. I’m excited about the longer one. It’s a collection of essays and poetry written since I met Robert Wolfe,” a Zen master in Ojai. “I sent a copy to Non Duality Press and they sent a reply.” They’ll talk about maybe publishing, he says, in the coming weeks.

Born in New York, Faierman learned guitar in his teens and gigged with several hardcore groups before moving to San Diego. Back then, his life was gardening and meditating and songwriting. His “Elliott Smith duels with Jeff Buckley” became well-known at area open mics. In addition to art-noise, pop, and folk-rock projects, Faierman later fronted a trio called Mashtis before jettisoning them for Mu, then the Bulletins, and finally the indie-pop Speaker in Reverse.

“It’s like I told each of the band members: music got to be like wearing an old Halloween costume you had when you were a kid. It was still pretty cool, but it doesn’t fit anymore. The legs are too short, and the sleeves are too short. I’m not a rock-and-roller anymore.”