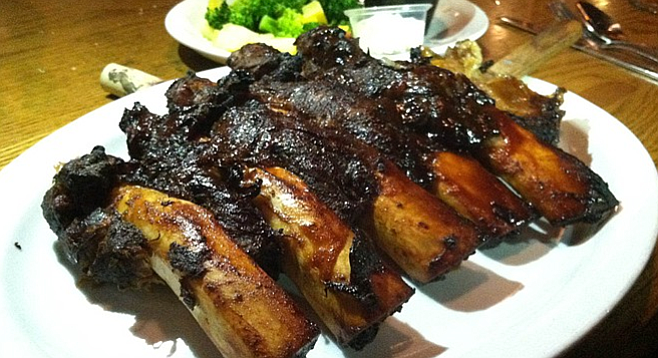 Some of you may remember that a while back I undertook an epic journey throughout the county in search of barbecue. I found good and bad in ample amounts, but the ordeal was so strenuous (I was defamed and condemned to eternal damnation in the process), that I took a long break from ribs and brisket. 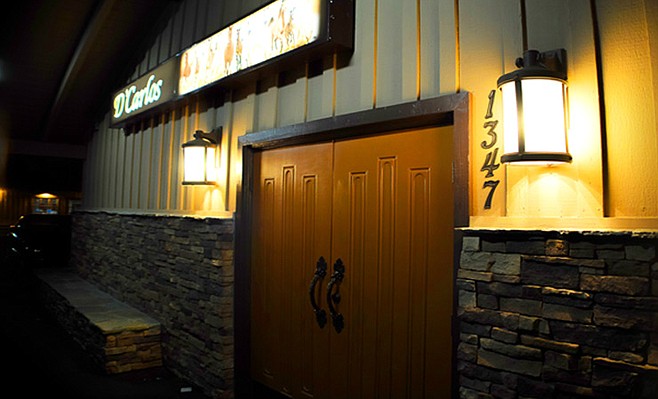 That break is over as of now, because I must speak up about the beef bones at D’Carlos. Yes. That’s right, Ramona’s horse-themed, “Murican” restaurant dishes up a kickass beef rib.

I do not know why D’Carlos has such exquisite bones or how the kitchen achieves this feat of slow-cooked mastery. My assumption is that the bones remain behind after the prep for the restaurant’s nightly prime rib dinners, which explains why they’re trimmed down a bit more than they might otherwise be, but the specifics of their preparation elude me. However it goes, the result is pure, tender succulence covered in a deep, all-over bark of crackling goodness.

Maybe it’s that I spent the bulk of 2015 outside the U.S. and have been far removed from barbecue, but D’Carlos’ beef bones call out to me with a siren song and I am powerless but to throw myself upon the rocks and be dashed to barbecued smithereens.

Also, anyone who makes the trip up the hill (or any locals prone to swing through), do try the Hellanback Rancher’s Classic while it lasts. Made right there in Ramona, it drinks like a decent Bordeaux and has a lot more going on than a lot of similarly priced SoCal wines.

I have to admit I got a bit wary when I read the sub-headline ("Horse-themed restaurant knows barbecue"), thinking it might not be beef. ;-)

I actually ate some barbecued horse last year in Bulgaria.

Definitely not horse on the menu in Ramona!