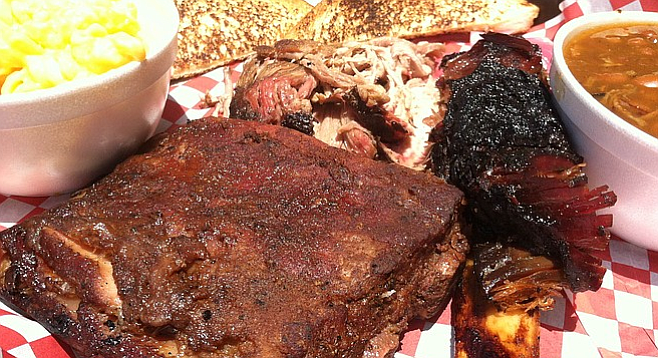 Bugsy’s has had enough time to get better

I give new barbecue joints the widest berth of all restaurant debuts. In my experience, really getting the production schedules dialed in takes a lot longer for barbecue, and the first few months tend to yield dismal results. Thus, it’s been about four months since I got the heads up on Gaslamp newcomer Bugsy’s BBQ.

It’s unfortunate that restaurants such as Bugsy’s continue to embrace a Rat Pack/gangster/macho theme by hanging pictures of Depression Era NYC and Frank Sinatra portraits on the walls. What, exactly, was so great about the middle-third of the 20th Century? The fact that beating up “mouthy” wives was socially acceptable? How cool it was that black people couldn’t drink from certain water fountains? Why such a focus on the least impressive elements of that generation?

Anyway, end of rant. If only there was some good barbecue to ease the burn. Too bad the pitmaster hasn’t been able to sharpen his game. He’s had enough time.

Inconsistent efforts are the bane of barbecue, and Bugsy’s suffers in that regard. The pulled pork lacks character (though at least it isn’t dry) and requires a drenching of sauce, which it should not. Overdone beef ribs and (very slightly) underdone pork ribs carry a burdensome amount of smoky flavor. Side dishes span the spectrum from okay to adequate. Nothing horrible, nothing wonderful. The $24 meat combo (three meats and three sides) is enough food for two or three people, so price is the only thing that isn’t a sticking point. 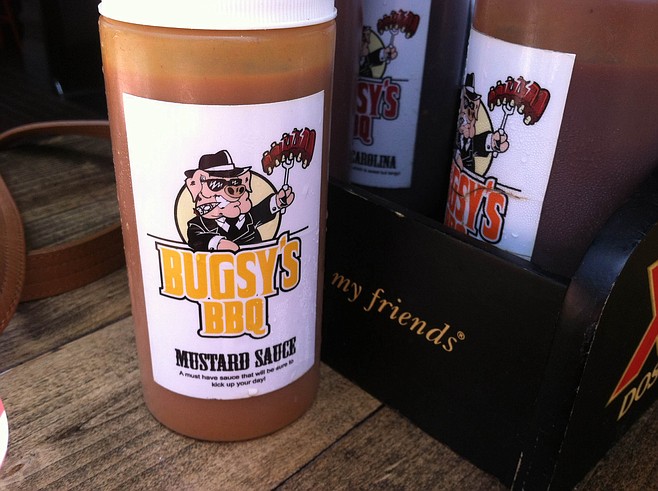 Bugsy’s sauces are the lone example of truly expressive cuisine.

Bugsy’s sauces are the lone example of truly expressive cuisine, though, like modern art, what they express is not necessarily good. The curious “mustard” sauce, which ought to be a tangy white vinegar and mustard concoction perfect for pulled pork, is more like the honey mustard stuff kids like to put on chicken fingers. The “traditional” sauce tastes strikingly similar to Mott’s cinnamon apple (which is actually impressive). The supposedly spicy “Grim Reaper” could not take on anything fiercer than a kitten.

As a barbecue lover, I appreciate the effort to bring barbecue to the Gaslamp. I wish Bugsy’s were a stronger effort, and perhaps it could be with a lot of tweaking. But right now there are plenty of better options elsewhere.

Thanks again for taking one for the team!