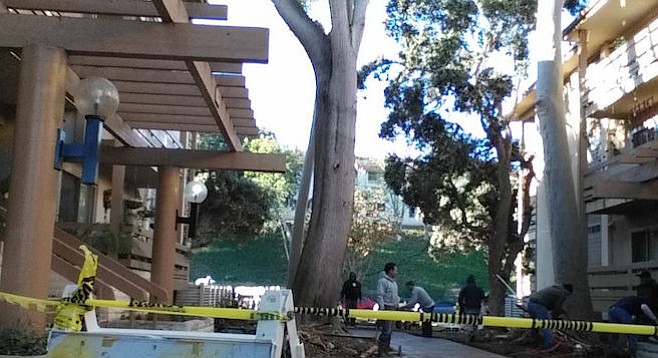 Shelly Schwartlander has been living at the Point Loma Tennis Club since 1991. The complex, built in 1968, sits on 13 acres and has approximately 260 trees of many different species. But it’s the eucalyptus trees that keep Schwartlander awake at night. She says they are overgrown with heavy branches and the roots have been removed.

“For a few years I have tried unsuccessfully to get [the homeowners' association] to reduce the heavy limbs of a 90-foot and a 80-foot eucalyptus tree as an independent certified arborist advised should be done in fall of 2014," she said. 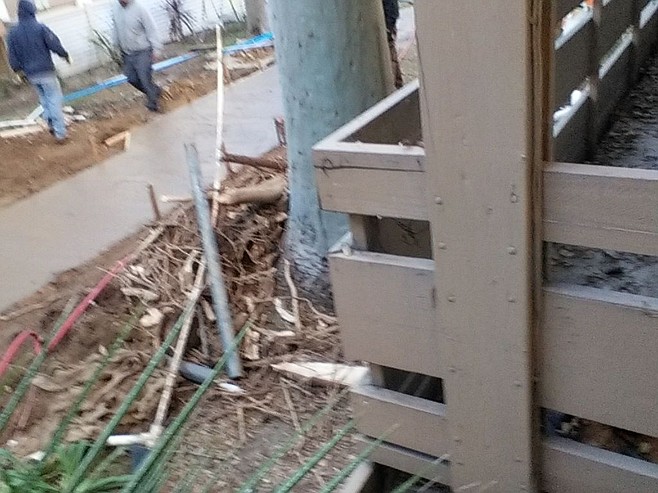 “Now, at the end of 2016, the overgrown trees threaten two 3-story buildings — at 4012 Valeta Street — that each have 26 units, as the trees are less than six feet from the buildings, lean close to the buildings, and the heavy limbs are over the buildings and walkway…. Not only are they neglected, but the landscapers have removed the roots from both trees in December 2015 and then again in September 2016 to make room for a sidewalk."

After the root removal, Schwartlander said it “looked like a graveyard full of tree roots…huge amounts of roots dug up right at the tree trunks, roots filling large garbage bins full and roots as wide as ten inches or so close up…. With the amount of roots removed, it's hard to imagine the trees are stable, especially as eucalyptus don't have deep roots.”

Since the Point Loma Tennis Club is private property, Schwartlander hasn’t been able to involve the city, although she was told someone would "check it out."

“We pay [ homeowners' association] fees which cover the landscaping and maintenance," said Schwartlander. "I served on the board last year and wasn’t even allowed to mention the trees. They won't listen. There’s no way to justify it. It’s a dangerous situation for everybody around here."

Once those trees buckle over in the next storm and kill someone, then the HOA will take notice, after receiving a wrongful death lawsuit.

It seems that would be the possibility, Justin, that would make most do the right thing. But the HOA Board and manager ignore letters, pics, what's seen, and the expert report advising them of the the overdue action needed. They must be sure they are "excused" from responsibility. The money is there as are all the warnings. I've pondered this long and often and fear and disappointment is all I get for my efforts and fees. .

As past president of our former HOA (338 fourplex townhomes) it was basically a eucalyptus forest. We'd lose a tree branch or two every winter, knocking down fences, or worse yet, going into someone's home. 15 years ago the Board approved an every-two year trimming of every tree, and have lost only a few since.