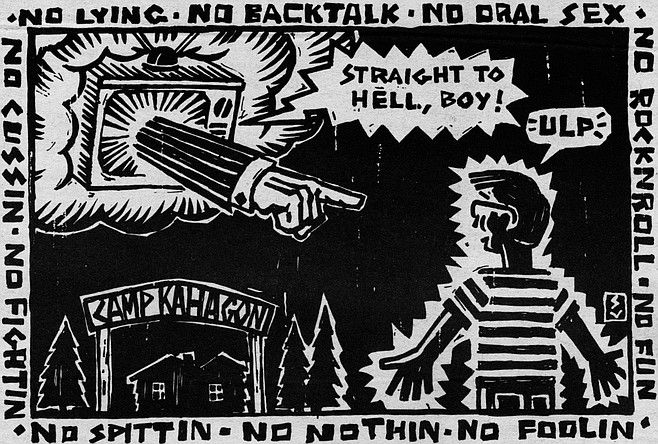 From Santa Claus to housepets to Arnold, OJ, and the brain

The Tubes of My Life

1966, home from college. Nothing better to do than sit around with mom and dad and watch some wretched WW2 thingie with Jack Warden held captive in the South Pacific. Could very well have been some top-rated series ’cause that’s all they watched I’ve easily overcome any addiction I might’ve had, and this one’s so lame I’m ready for bear, laughing at all the wrong parts — i.e., all the parts (I’ve studied Dada so I know the triggers).

It felt so-o-o great to see, well, maybe not a dentist, but his hygienist lackey wince, cringe, every time her tool struck capillary paydirt. And it wasn't from the mere sight of blood — that tired, old number. It was the meaning of blood. Blood and pestilence. Blood as death. My blood and saliva spiraling down the sink. I gaze at the lackey's panicky blues as they gazed — at the spiral. Blood, spit 'n' panic. Look who's squeamish now!!

Jack Kerouac’s biggest problem was he didn’t drive, that by depending too exclusively on others for both general mobility and immediate vectors into and out of place-coded situations and experiences, he was ultimately consigned to a sensibility — as both writer and man — too monochromatically that of the Passenger: passive and/or “out of control,” restless of hand and foot, unaccountable, “not responsible.”

Heck, I’d only really had one car problem all trip (in a storm in New Mexico).

When I rented my Claus suit the haggard folks I rented from were, they said, “just getting over the Halloween rush.” Obviously, from certain obvious p.o.v.’s, Christmasinamerica has become in recent years something of a secondary Halloween, no, not secondary, second: a second take on trick or treat in less than two months. Maybe it’s Halloween itself whose relative stakes have been upped, but whatever… Actual Santa (idealized, Himself) is the promise of an upped trick-or-treat ante.

19 ants — an ant farm — one of those $9.98 plastic jobs. I was their farmer. I’d sit and watch them dig, move sand around, tho it wasn’t sand, some kind of white talc-y sand substitute. There is no sub for interest, however, and, burrowing done, these miniworkaholics soon got bored & boring. Meaningful farmwork a thing of the past, they paced like 6-legged seniors on a geezer farm. — Where’s the checkers, Jethro? — I’m tired of checkers, Zeke.

There are mornings and nights where I v. much feel I have NOTHING to say. Nothing left to say. Nothing ever to say — never had it. Papers on the floor, covering my bed, table, chairs, every inch of horizontal space taken up by notes and sundry for chapters-in-progress. Haven’t vacuumed or dusted since ’91. Great for the lungs. I ask my gal Irene: “Is this the home, the cell, of a defeated man?” No, she says.

“Carta Blanca’s the best. I would stand behind Carta Blanca. It’s the first one that’s given me any sense of, you know, where I have conviction about it. Its taste is very good — it’s round. It’s got a very round combination of tart and sweet. But I just feel compelled to comment on the ludicrosity of putting words to an experience that’s purely sensual or sensorial — or nourishment that’s only, or biological satiation.”

You want a soundtrack, though, okay, I’m a whore just like the rest—here’s a soundtrack. Soundtracks are about manipulation. (In this case: further manipulation.) Even “high art” uses of music with image serve (or seek) to deliver otherwise undeliverable footage in dotted-line context, to underscore it, italicize it, make it grip (and “move”) an intended audience otherwise ungrippable. Godard liked using gratuitous surges of thematically irrelevant (all-too-relevant) music to accentuate (subvert) both its invasiveness and generic necessity.

Arnold, OJ, and the Brain

Ronald Schoenberg?...that’s right: HIM. L.A. judge who let O.J. walk, no jail time— the time he just beat her up — Nicole. Uproar, furor; all the heat Ron has had to endure in the wake of u-know-what. Demands for his resignation. Is the SON OF MR. TWELVE-TONE…. 360 North Rockingham Ave., Brentwood — an address you know, right? O.J.’s estate, where they arrested him,, is not far from where the Family Schoenberg moved when daddy took the UCLA gig.

Hey Mr. Deejay, What's That Powder on Your Face?

Toward the end of the two hours — what the hey — I put on something from my waning days on the rockwrite dole, ’75, ’76, back when I was still plugged into the food tube of the record industry, anyway still on mailing lists, Royal Scam by Steely Dan, which I’d saved for one cut: “Don’t Take Me Alive.” Good lyrics I thought, from the p.o.v. of this cornered rat, a cocky bozo about to be nailed by the cops.

The best of the Flash Gordons, and the best of the whole set, was the first of that series. Space Soldiers (1936), which in addition to giant standing lobsters, lion-men, a flying palace kept airborne, and Ming (the Merciless) had snippets of the first music I ever felt compelled to call “exciting.” Two years ago I was able to i.d. the snippets as having been lifted from Les Preludes, the 1854 tone poem by Liszt.

For more articles by Richard Meltzer visit his staff page