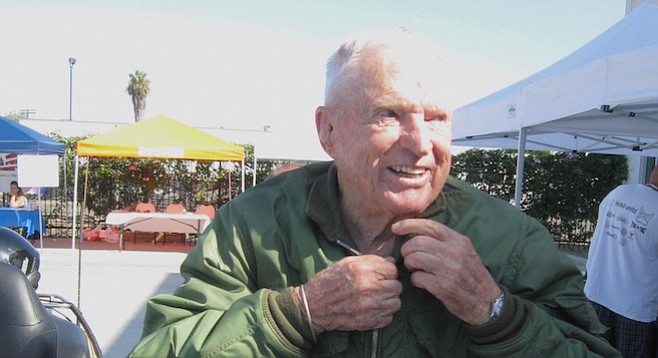 On Saturday morning (August 20), while walking around Sweetwater Harley Davidson with Marine veteran and salesman Bobby Bradshaw, we stopped by a poster depicting the cover of the January 2016 edition of Homeland Magazine, which shows a picture of then–Navy Lt. Royce Williams pointing to a damaged aircraft.

Now–retired Navy Captain Williams was due presently to speak to a growing gathering of mainly veterans. He arrived on the back of retired Navy chief hospital corpsman Bill “Doc” Reid’s three-wheel motorcycle, escorted by retired Navy Cpt. Art Debernarde and Mike Zajda from the Patriot Guard Riders. After handshakes all around, the sharp-as-a-tack 92-year-old Williams, wearing cowboy boots, took his seat in front of those gathered to hear him.

He began by saying he was going to recount one hour and 35 minutes out of his 38 years on active duty in the United States Navy. Specifically, he was going to speak about a mission flying an F-9 aircraft over Korea on 18 November, 1952.

Launching off the aircraft carrier U.S.S. Oriskany, Williams was one of the pilots in a four aircraft mission from Fighter Squadron Seven Hundred Eighty One (VF-781). The rest, as the saying goes, is history. History perhaps best captured by the citation accompanying the presentation of the Silver Star Medal for his actions that day: 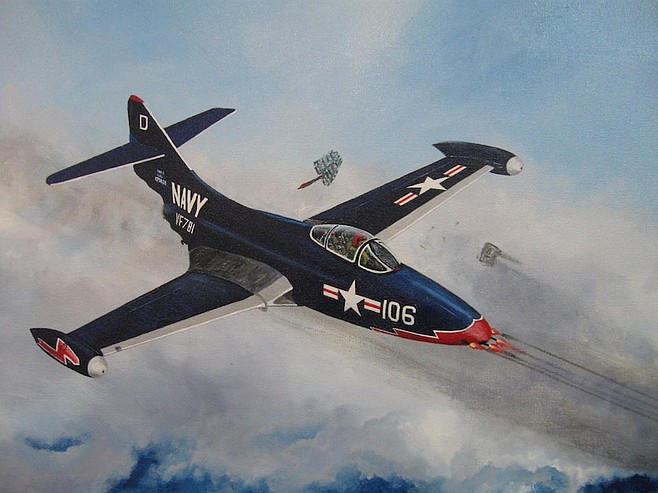 “While flying a combat patrol mission over Task Force 77 in the northeastern coastal waters of enemy-held North Korea, Lieutenant Williams demonstrated outstanding courage by placing himself and his accompanying planes between the Task Force and an attacking group of seven enemy MiG-15 aircraft, thereby protecting the Task Force from enemy attack. Having repelled the initial attack of enemy aircraft, he skillfully maneuvered his plane into position where he was able to make two firing passes on one of the enemy fighters. Breaking away after the second pass, he saw the enemy aircraft spiral into the sea. On a subsequent run he inflicted heavy damage to another enemy aircraft, which was seen to smoke badly and retire immediately from action. Although his own plane was severely damaged by a direct 23-mm. hit from one enemy MiG-15 aircraft, he maneuvered to escape yet continued his direction of the engagement until he reached cloud cover in which he dodged the enemy and returned his almost uncontrollable aircraft on board the parent carrier. This skill and daring exhibited by Lieutenant Williams and his complete disregard for his own personal safety materially aided the accomplishment of the mission of the Task Force. His courageous actions were at all times in keeping with the highest traditions of the United States Naval Service.”

Williams calmly, and at times with humor, described the mission, obviously something he has done countless times. With a mixture of humility and pride, he told of fighting the Russian pilots that day. Yes, Russian pilots launching out of Vladivostok flew the MiG-15s. Williams is credited with shooting down four of the seven, even flying what he described as an aircraft inferior to those of his adversaries.

In the 35 minutes of aerial combat, Williams’s aircraft was hit 263 times, a count coming from a Navy mechanic circling each hit on the plane with a marker after Williams had safely returned to the carrier. The photograph on a poster-sized display of the cover of Homeland Magazine showed some of that damage to his aircraft.

Were this all there was to his career, Williams could stand justifiably proud. But nearly 14 years later, according to the citation accompanying the Distinguished Flying Cross, in April 1966 “he personally planned and led a highly successful aerial strike against a key enemy installation in North Vietnam.”

At the end of his comments and in response to a question from the audience, Williams spoke of his involvement with prisoner of war (POW) matters during the Vietnam War. From his telling, the Navy was spurred to action by comments from Ms. Sybil Stockdale, wife of Navy Commander James Stockdale, a POW being held by the North Vietnamese.

After Mrs. Stockdale — described as a fierce advocate for POWs and their families — criticized the handling of POW matters, Williams was assigned as the Navy’s director of POW/MIA Matters. It was in this role that he authored the directives guiding the care and handling of repatriated POWs, as well as working on the aftermath of the capture of the USS Pueblo. 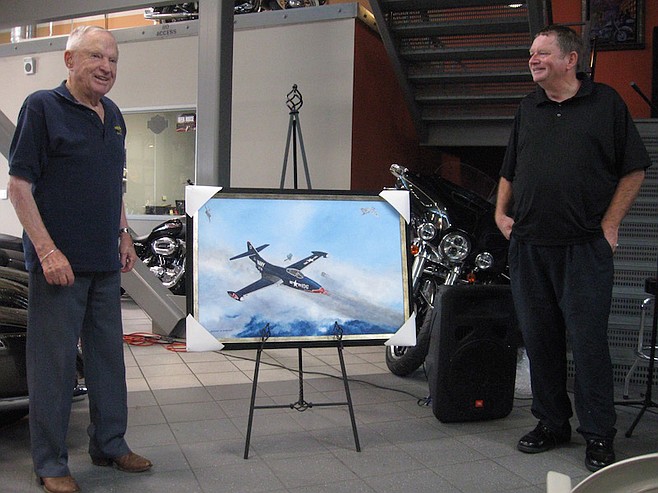 Toward the end of the question-and-answer period, Williams wrapped up, saying, “it was an unusual mission, but it was just another mission. I was doing what I was trained to do.”

Taking the floor, “Doc” Reid then introduced artist Richard W. DeRosset, who presented Williams a gift of a painting illustrating the described aerial combat. Giving credit to Reid for putting him in contact with Williams, DeRosset characterized doing the painting as a great honor, saying, “A good painting pulls you in emotionally.”

After showing him the initial painting, DeRosset recounted that Williams said it was stunning, but not that accurate. Insisting on accuracy, DeRosset then worked closely with Williams to ensure its accuracy, ultimately leading to 17 changes.