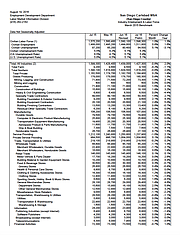 July's unemployment rate was 5.3 percent, up from a revised 5.1 percent in June. California's Employment Development Department reported that the rate is now higher than the corresponding national rate of 5.1 percent.

The rate for California during the same period was 5.9 percent. San Diego's unemployment rate has been rising since May.

The biggest job loser in July was the education sector, shedding 13,500 jobs from June. The county lost a total of 11,300 jobs over the last month, but gained 28,100 over the last year.

Fiery and Not at All Peaceful

July's unemployment rate was 5.3 percent, up from a revised 5.1 percent in June. California's Employment Development Department reported that the rate is now higher than the corresponding national rate of 5.1 percent.

The rate for California during the same period was 5.9 percent. San Diego's unemployment rate has been rising since May.

The biggest job loser in July was the education sector, shedding 13,500 jobs from June. The county lost a total of 11,300 jobs over the last month, but gained 28,100 over the last year.

I've been in Philadelphia for a couple weeks. There are a lot of homeless here too. Panhandlers are driving me crazy. Cisco is laying off a massive amount of U.S. workers while recruiting in India. Uber says they are going to deploy self-driving cars in Pittsburgh soon.

If this technology is quickly adopted, we are going to have a massive unemployment problem with drivers and delivery logistics. I also noted how many immigrants I encountered. I used Uber and they all could barely understand English.

I think there is a fundamental problem with our economy. We are trying to prop up our economy with immigration rather than innovation. America is on a very dangerous road. We cannot keep flooding our country with immigrants expecting cheap labor to raise our GDP. In Germany, Syrian "refugees" are refusing to take job offer because they claim they are "guests" of Merkel.

I have never been so alarmed at the station in "progress" our country finds itself. In some things what Trump has pointed out are a true concern. But we need leadership that can do more than scare people, we certainly need to re-examine why we are flooding our country with people while automation will eliminate 20% of the labor in the next 15 years.

Since slavery immigration is and has always been about cheap labor. Since the early 70's we have been on a race to the bottom and the elimination of the middle class.

AlexClarke: What about American companies setting up manufacturing plants in Mexico, China, dozens of other countries paying low or slave wages. Isn't that the desire for cheap labor, too? And isn't that a bigger problem than immigrants? Best, Don Bauder

Yes it is. It is a result of bought-and-paid-for politicians passing free (not fair) trade deals that benefit a few and sell out the American worker. Walmart has sold the idea to millions of people that low wages and imported crap is a good deal for the consumer. People wonder why the middle class is disappearing and then vote for the very free traders and open border corrupt politicians over and over again.

AlexClarke: Top management is egregiously greedy. You are right that people in the lower rungs economically do not vote in their own interests. Management is laughing all the way to their hedge funds and offshore stashes. Best, Don Bauder

For a long time, I've had the suspicion that these 'free trade" agreements were far from free, and that the US was getting she short end of the stick. Our trade imbalance with China should be the best indicator of that. But within the past two weeks, two respected publications, Barrons and The Economist, both came out for free trade, and expressed alarm that both of our current two candidates are talking abut a reexamination of these "wonderful" deals. TPP is dead; long live tariffs. Those pundits who are and have always been for free trade are going to have learn to live with a new era of close scrutiny of these unbalanced deals. NAFTA is the least of our trade problems. It was premature back in the early 90's, and if we were looking at it today, it would still be ill-advised and premature.

Yes, and I remember the disdain that the press had for his comments about the "great sucking sound." Had he been a better spokesman, and a more serious candidate, he might have come in second in the vote, rather than third. Of course, if Poppy Bush had been a better and more coherent campaigner, and if he'd started a few weeks sooner, he might have been reelected. There's a thought: no slick Willie and no Hil. How history might have changed.

Poff. A carriage without a horse?!. Poppycock. Whoever heard of such a thing. It's a fad. It'll never catch on.

mridolf: The automobile in its early decades made everyone a comedian. When people saw a motor car broken down, and the driver trying to fix it, they shouted, "Get a horse!" It was the joke of the first half of the 20th century, because everybody had a chance to shout it.

Reciting this does not mean I have missed your message. I got it. Best, Don Bauder

I think companies want to import cheap labour over setting up facilities overseas. There are 2 reasons for this: 1) High start-up and sunk costs work against having a flexible work force. 2) The US is the only major economy where there is "Employment-At-Will". Being able to hire and fire with few repercussions is why US companies want to bring people to the US. In most other major economies it is harder to let people go as they use a "Just Cause" employment doctrine.

hwstar: You have a point but American companies are still sending jobs to overseas plants utilizing cheap or slave labor. It is true that the H-1B and other programs bring in immigrants, who serve the same purpose.

That purpose is to fatten corporate profits, so top managers can be paid absurdly high wages. With the U.S. middle class -- the backbone of consumption -- diminishing, corporate America is pursuing a very stupid, greedy strategy. It will backfire. Best, Don Bauder

Mike Murphy: Yes, there are abuses of the unemployment system. There is no question about that. Politically, it may be difficult to fix that system. Best, Don Bauder

Joseph Oppenheim: But the middle class began shrinking in the late 1970s and early 1980s. A couple of years of gains won't close that gap. Best, Don Bauder

AlexClarke: The attack on unions definitely played a role in the shrinking of the middle class. There were other factors, of course -- all related to top management greed. Best, Don Bauder

Robert Lay: You should have taken photos of the whole caper and sent the photos out on the internet. Best, Don Bauder

Pretty soon, the upper one percent will have to get by by selling yachts to each other. The rest of us will be eating each other.

Flapper: When buying a yacht, the upper 1 percenters have all kinds of tricks to dodge sales taxes. One of them is for both parties going out to sea beyond the area that belongs to the U.S., and consummating the transaction there. Then the yachts are registered in tiny offshore tax havens.

I have said this before and I will say it again: very rich Americans in many respects are traitors to the country that made them rich. Best, Don Bauder