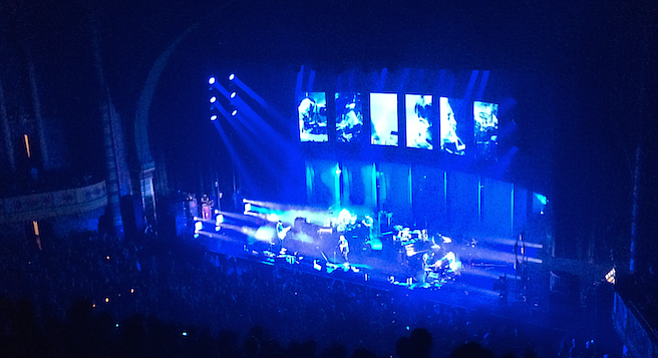 Radiohead: Dialed in at the Shrine

Shrine Auditorium has a gorgeous personality, a haunting elegance that paired well with Radiohead’s bipolar extravagance, as the English quintet performing 24 intimate songs to a sold-out crowd of 6300. The night looked like a sporting event — you never see more people wearing the headliner’s T-shirt than at a Radiohead concert — with the roar of the crowd at the beginning of a recognizable chord and fans yelping and applauding in the middle of song. It was electrifying.

...off of Radiohead's Moon Shaped Pool

The warmth within the crowded lobby along with the atmosphere of excitement and anticipation had us in a pre-concert sweat. But a rush of chills draped the audience as the Radiohead emerged from the silent darkness and began the night with ”Burn the Witch,” the abrupt first single off their latest album, Moon Shaped Pool. The psychedelic rocker was full of fidgety strings, Yorke’s cooing vocals, and a hip-hop drum track played by Portishead drummer Clive Deamer behind Philip Selway's pocket-drumming. Radiohead proceeded to play the first five tracks off the new album, and then came the opening chords from 1998’s “My Iron Lung,” sending the crowd into frenzy — the song was perfectly placed.

Instruments were filtered on and off stage, capturing every intricacy Radiohead has in their arsenal, and keeping the sound crew extra busy. Wheeling out a piano here, exchanging a guitar there, and more drums!? Guitarist Jonny Greenwood was even required to spank a few drums in order to pull off the fitful drumming from The King of Limbs’ “Morning Mr. Magpie.” Then it was “Lucky” that had everyone singing along to the triumphant 1997 single off of OK Computer. After the hype, Radiohead crawled into the deep and dark. A plodding piano, overlapped by Yorke’s chilling vocals, delivered “Pyramid Song,” slowing down the set.

The venue was loud, the cheers of the audience ear-splitting, sometimes louder than the music. The bass kick on “Everything in Its Right Place” had fans stomping and clapping like at a European soccer game. Yet everyone kept eyes glued to the stage.

Between Thom Yorke’s frantic dancing that had the ladies in awe during “Feral” to the somber and intimate melancholy of “Daydreamer,” Radiohead pulled out with mixed emotions. A double encore ended the night with the gloomy and beautiful “Reckoner,” stamping the fact that Radiohead is fresh, unpredictable, even after nearly 30 years together.