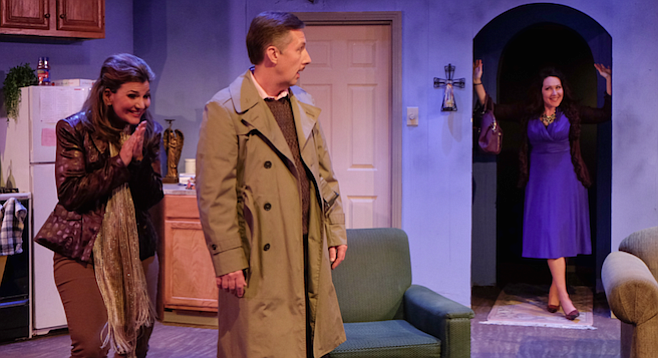 Wallow in the awkwardness

Jon Lonoff’s comedy is scoring many laughs at Scripps Ranch. The play has one of the simplest plots ever. An overweight, insecure woman meets a rough-cut but sweet guy. They fall for each other. Then she has misgivings and calls it off. At least that’s what she thinks she’s done.

This production boasts some fine actors. Brenda Adelman, as Maureen, is a fine comedienne and gives a highly believable, reality-based performance. Daniel Gurian, as Joe, is a regular guy, but in touch with his feelings. His character recalls Ernest Borginie’s Marty, from the 1950s teleplay — funny one minute and touching the next.

These two actors strike a good connection. What would otherwise be flat, awkward pauses are here full of potential, and we can wallow in the awkwardness and reap the rewards of insight into the characters.

Bob Shuttleworth’s set, an apartment in Queens, is appropriately worn and tacky. The scene from a pay phone works well on a revolving set panel. But the scenes in the gym and the plastic surgeon’s office don’t convince because the apartment set (even though partially draped in black) is quite distracting.

Rounding out the cast with a flourish are Cindy Chavez, as sister Shelia (a sleek, toned character addicted to plastic surgery) and Charles Peters as her flirtatious husband, Squire. While Chavez is believable, her voice is strident at times. Peters is sharp and smooth, as one would expect Shelia’s husband to be; although, showing signs of a bigger ego might have been more effective.

Eric Poppick has directed with a sure hand for the comedy of ordinary lives caught in extraordinary moments.

The playwright is an actor of some note and has much experience writing corporate and documentary film projects. He has a way with comic lines, which is admirable, but plotting is a bit creaky. Things get bogged down in the final scene as Lonoff tries to find a good resolution.

The play mines all the comedy it can get out of an awkward blind date, but it is aptly named. I don’t know if it’s got enough to sustain a whole evening’s entertainment, but if laughs are what you want, then laughs are what you’ll get from this breezy, lightweight piece of theater.