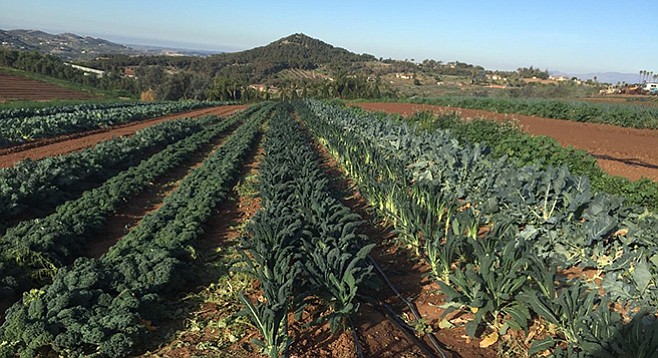 As predicted, Be Wise Ranch has lots of strawberries coming to market in April. Beets are also plentiful, including chioggia, also known as candy cane beets for their distinctive red and white stripes. Rainbow chard heads the colorful list of leafy greens, which includes kale and romaine lettuce and red varieties of all three. Or, try mizuna, a Japanese mustard green found in the Be Wise spring salad mix and good on its own in stir-fries and soups.

JR Organics continues to harvest snap peas, carrots, and beets this month, as well as cabbage and cauliflower. It’s also a good time to check their countywide farmers’ market stands for broccoli and broccolini. The latter is not, as commonly believed, young broccoli — rather, a cross between broccoli and Chinese broccoli.

Stehly Organic Farms grows lots of citrus, and right now that means navel oranges, gold nugget tangerines, ruby grapefruit, and eureka lemons. Blood oranges and Meyer lemons, too, though these may not last into May. Stehly also sees a great run of strawberries, snow and sugar snap peas, and chioggia beets. Expect a variety of kales on Stehly market shelves, including curly, black, and red Russian.

Adam Maciel Organic Farm has summer squash aplenty, including crookneck yellow, plus green, yellow and striped romanesco zucchinis. The Maciels also report some aromatic celery. Unlike at grocery stores, they don’t trim the long bunches of leaves, which can be great for juicing and flavoring soup stocks. Their freshly available spring mix features a blend of tender red leaf and crispy green romaine.

Adam Maciel’s parents began farming geraniums on 20 Bonsall acres in the early ’70s but stopped after a few years when the market dried up. In 1988, Adam started growing both flowers and vegetables there on his own, selling them at the county’s original farmers’ market in Vista. He later added an adjoining parcel with his wife and childhood friend Laura. After successfully certifying the five new acres organic, they did the same with seven acres of the family’s original plot.

In Bonsall’s relatively cool microclimate, Adam grows seasonally rotating greens; herbs such as cilantro, parsley, and dill; and root vegetables including carrots, beets, turnips, and radishes. His brother Anthony operates a farm down the road known as Maciel Family Farm.