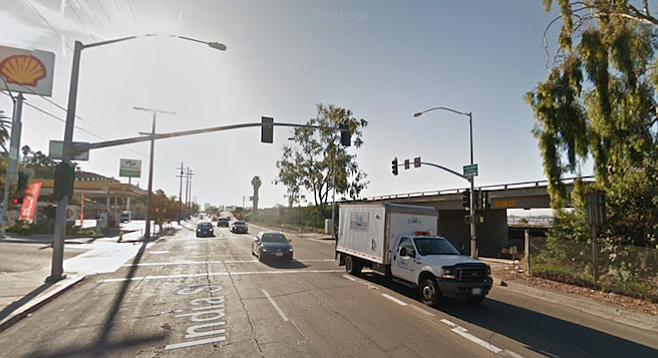 Airport authority and city plan for a fourth lane

Residents and business owners from Middletown (south of Mission Hills) showed up angry and worried at a neighborhood meeting held at Joyce Beers Community Center Tuesday night (April 5) to ask why no one told them about a joint city–San Diego County Regional Airport Authority plan to turn one of the area's only access streets into "a speedway."

"They have planned this without consulting those affected by the changes," said Beckie Webster, who has lived and run a business in the area for 27 years. "What they've planned will make it almost a freeway — that's how fast people go; [it will] worsen the danger for residents and people trying to get across the street."

The airport authority and the city are talking about adding a fourth traffic lane to India Street between Laurel and Sassafras streets, and other changes to India Street that reach up to Washington Street and the area known as “Five Points,” around where Washington, India, and I-5 all come nearly together.

The city engineering representative who was supposed to speak about the Five Points project didn't show up to the meeting, though about a half dozen people came to hear the presentation. Calls to the city and the airport authority Wednesday morning were not immediately returned.

The Uptown Planners group (representing Mission Hills, Hillcrest, University Heights, Bankers Hill/Park West, and Five Points/Middletown), which heard the complaints at the meeting, was also not aware of the plans. In a unanimous motion, the group voted to bring representatives from the city and airport authority to its next meeting.

The proposed fourth traffic lane on India Street will come at the cost of reduced parking in an area where parking is already highly sought after, Webster said.

"India Street is heavily residential north of Laurel, and the loss of parking there will force more residents to park above [east of] India, where there isn't much parking to spare," she said. "It will have a negative impact on India Street businesses and increase speeding."

It will also make it harder to use Sassafras Street, which is the only street that crosses under I-5 between Laurel and Washington. India, northbound, and Kettner, southbound, are the only streets that are real neighborhood throughways for the area since most other streets exist for less than a mile before they dead-end.

"For those who live on India, it's our only access to our residences," Terry Fenwick said. "If they take away parking, we're going to have to think about residential parking permits."

Su-Mei Yu, who owns Saffron restaurant, called the plan "a massive explosion" caused by outsiders who think they are making small changes to the neighborhood.

"What is happening is government officials are doing little tidbits of addressing their problems without considering the impact on the whole area," she said. "You need to consider what it is doing to the small businesses and the community."

What bothered residents the most, however, was that the plan was formed without their knowledge.

"No one told us and we sure will feel this," said Rick Trovato. "I heard about it because some other business owners found out by accident and put out a flier yesterday."

The fliers, put together by Matt Ramon after he learned about the plan "almost by accident," drew about 20 people. Ramon, who said he is a partner in Urban Mo’s, Baja Betty’s, and Gossip Grill, said that when he and a friend took the fliers door-to-door on Monday and Tuesday, everyone they spoke with said they were completely unaware of the plan.

"It's 400 pages of reading we had to pick through, so they've obviously gone pretty far with it," Ramon said. "It's really upsetting that they didn't bother to talk to any of us — and that we had to be the ones to let our neighbors know about it."

In some cities in this county, in the name of "traffic calming", lanes are being eliminated with the goal of slowing traffic and making local businesses more visible and accessible. This proposal goes in the diametrically opposite direction.

We must suppose that there is a desire to move traffic in greater volumes and faster out of the area and onto the freeway. Or at least something like that. If I were a resident or business owner in that area--which I'm so grateful not to be--I'd be outraged that the planning has reached such an advanced state without having been advised. There might be a way to satisfy everyone here, but they'll never find that out if things continue as they have been going. Just another example of the Faulconer city hall and its roughshod methods when they suit his backers.

This makes no sense. I drive this stretch of India and it's never too congested. There is no need for a 4th lane. I am guessing the airport authority thinks its a good idea because the new rental car center on PCH will probably tell renters to use Sassafras to get to the nearest 5 North entrance. But even if that's true, 3 lanes are plenty. Parking is needed a lot more than a 4th lane. So dumb.

"I am guessing the airport authority thinks its a good idea because the new rental car center on PCH will probably tell renters to use Sassafras to get to the nearest 5 North entrance." -- But how much extra traffic would that add? How many visitors renting a car at SAN are going to go directly from the rental center to I-5 North?

So yeah, this proposal seems unnecessary.