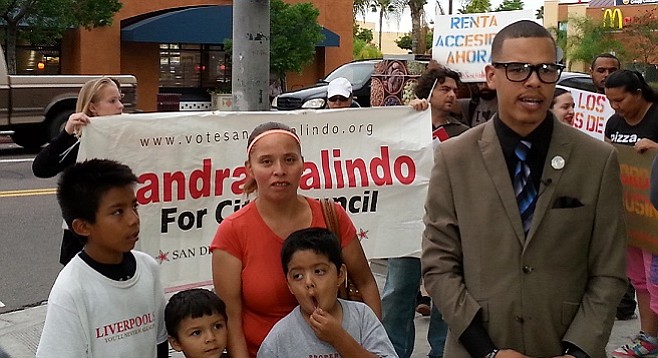 Group marches to derelict apartment house, no response from manager

Anti-slumlord protesters organized by the San Diego Socialist Campaign and city-council-hopeful Sandra Galindo were back on the streets of City Heights Monday evening (September 21), following through on what they'd planned a month earlier — a march to the front door of a property manager they say is responsible for unsafe living conditions in a local apartment complex.

This time, the group was joined by members of the San Diego chapter of National Action Network, a civil rights activist group formed by Al Sharpton in 1991.

Rev. Shane Harris, local chapter president, spoke with media on behalf of Maria, a single mother of three with limited English skills who stood alongside him for an interview while her boys mugged for the cameras.

"Maria is dealing with a cockroach infestation and other health-code issues," Harris said. "She is dealing with a landlord who clearly has not stood up and done anything to maintain the property. Because of that, Maria has been forced to deal with a host of challenges in living in her house.

"The city is supposed to hold landlords accountable for keeping their properties to code. When you have a situation like this where someone isn't dealt with, it affects their health and safety. It affects their families, and it's not fair," continued Harris. "We want justice for Maria, and we want to see justice for underrepresented populations across the county."

Galindo, who spearheaded the earlier rally on behalf of Maria after meeting her while canvassing the neighborhood, also spoke to the media, though her remarks to the assembled crowd of about two dozen were delivered in Spanish and through the assistance of a translator.

"The cockroaches, the spiders are everywhere — they're in the kitchen, in the bedrooms, and nothing is done," stated Galindo. "She pays her rent every month, and yet still these conditions persist."

Maria later displayed a photo (on her mobile phone) of her son's swollen and infected toe — the result, she says, of a spider bite that required hospitalization. The boy, seeing the photo, lifted his shoe up and hopped around on one foot, pointing to the toe that had been bitten. 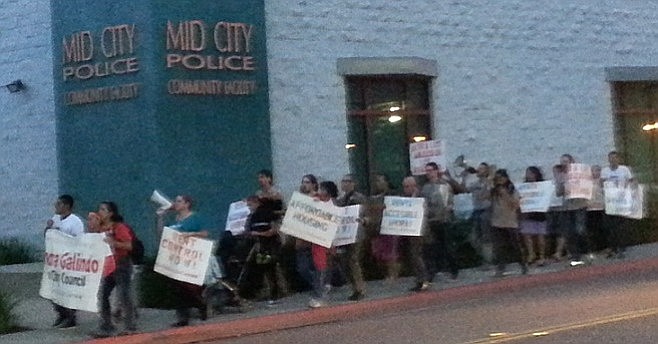 "We're gonna stand up for our rights — rent control in City Heights!" 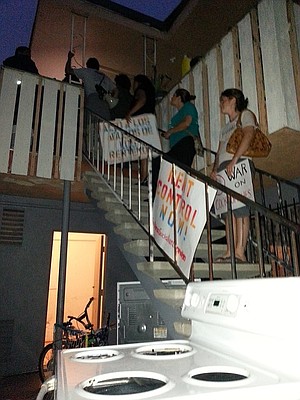 To the manager's apartment!

Shortly before 7 p.m., the group marched from the corner of University and Fairmount to an apartment complex on Highland Avenue, shouting slogans including, "We're gonna stand up for our rights — rent control in City Heights!" and "Stop the war on drugs, start the war on bugs!"

Arriving at Maria's property, protesters swarmed into the central courtyard, past a handful of broken appliances, and up the stairs to the manager's unit. When no one answered the door, the group began shouting their demands that the units within the complex be brought up to code (several others alleged their units were in similar condition to Maria's).

A petition, including nearly 100 signatures gathered on Maria's behalf, was left taped to the door of the on-site manager.

”Vamos a regresar,” the group chanted, promising a return if action wasn't taken within two weeks. ”Todos somos Maria!” (“We are all Maria!”)

Afterward, Maria invited media and protesters into her home for a tour. While cluttered, the apartment appeared mostly well kept. Beyond the piles of personal property, however, the unit's condition told another story.

An outlet with exposed wiring near the kitchen sink provided a doorway from which roaches entered and exited the kitchen. Water stains in the ceiling indicated a previous leak that hadn't been completely repaired. A wall-unit air conditioner, covered in peeling paint, was plugged into another outlet with exposed wiring, while plaster chipped off the window frame above. Unpatched cracks in the bathroom sink gave way to spots of rust. Other conditions, varying in their degree of seriousness, presented themselves as the tour continued.

A second attempt to contact the occupant of the supposed manager's unit was also unsuccessful.

If I lived in a place that was so terrible, I'd move.

If Maria could afford a better place, she probably would. Could you maybe donate money to her so she can move?

Moving is pretty friggin difficult, and I can only imagine it especially difficult for a single mother of three! I'm betting she's not paying much on rent, but rental fees are on the rise as a result of the choice made by owners to raise rent costs due to raised opportunities for profit. With the renter living in a house dealing with infestation and poor maintenance, it's good to take a stand against such abuse! Places like this shouldn't be allowed to exist for rent, there are standards that must be met for the renters! If these standards can't be met, the owner should be fined until they meet them or have their property siezed from them, as well as be forced to fork over money as damages caused to the renter who then needs to then move! Cover the moving fees, cleaning fees to meet demands for getting her deposit back, pay for the hospital bill and medical needs caused by the infestation, cover the loss of wages from having to take time to deal with all this crap, there's so much heavier punishment that should be enforced as a result of the abuse. If it were possible, I'd hope she'd end up getting ownership of the room/property if nothing is done. That infestation causes problems for neighboring buildings, and the poor maintenance is a fire hazard to the entire block if something happens!

JNOJR, your right, I'd avoid living in such a place with kids if I had any, but she's already there, so she should take this stand!

Everywhere is freaks and hairies Dykes and fairies, tell me where is sanity Tax the rich, feed the poor Till there are no rich no more?

Population keeps on breeding Nation bleeding, still more feeding economy Life is funny, skies are sunny Bees make honey, who needs money, No none for me

I agree, if the living conditions were terrible I would move as well. However, sometimes people can't afford to move to a place with better living conditions. My father for example would like to move, but can't due to financial problems. My father is from the same community, and he has the same problem with his apartment. He's been purchasing pesticides from local stores and they arent as effective. The landlord as well hasn't taken any actions to get rid of pests. I'm not trying to speak down on the community, but maybe its a community thing? Other houses I've went to in the area have the same problems. Everyone deserves to be in place that has healthy and sanitary living conditions.