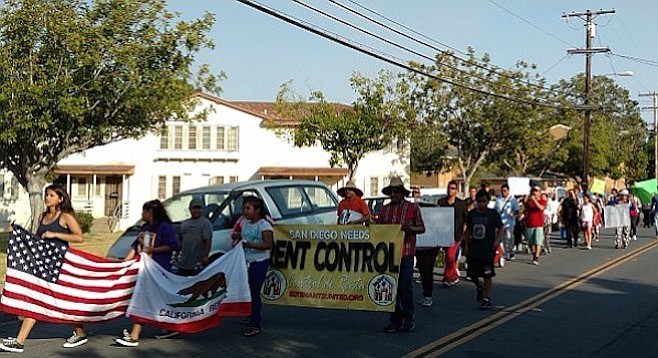 Tenants say they're being forced out after complaining to media

About 50 tenants from several apartment complexes marched throughout Linda Vista on Monday evening (June 20), demanding better living conditions and a halt to what they're calling retaliatory evictions against tenants who've spoken up about habitability issues. 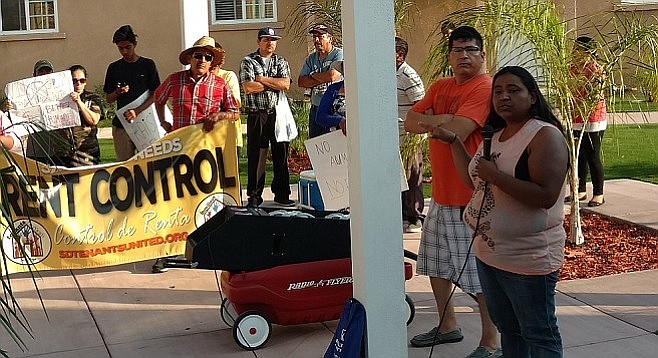 Susana Garcia (right) says she's being forced from her home.

"We've been paying rent for places that aren't good to live in, without complaining. But it's gotten to the point that it's enough, we're going to do something," said Susana Garcia, a resident of the Astro Vista Apartments.

Garcia displayed photos of her three-bedroom apartment's ripped flooring, molding walls, and lack of ventilation fans in the bathroom and kitchen, among other health and safety concerns.

"They wanted to raise my rent from $1500 to $2000 without even checking the condition of my apartment," Garcia continued. "We found out about [protests at the nearby Village Apartments] and some of us here decided to join them."

Garcia said that eventually property management agreed in late May to inspect the interior of her unit and others. 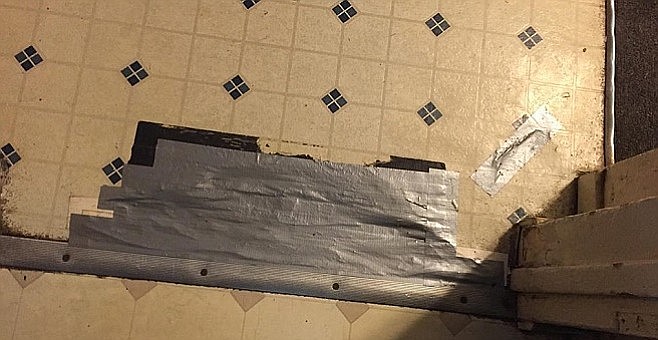 "The manager came in, and she didn't have a list of items to inspect. So I started telling her, 'This is what is bad, this needs to be fixed.' And she stopped me — she said, 'Don't worry, I'm gonna take a picture of everything that's wrong.' But she doesn't live in my house, doesn't know what's wrong that maybe she can't see right away.

"The next Monday, they sent a letter retracting the $500 rent increase to five of us. But two of us, me and my neighbor, got a 60-day notice that said we had to leave. But I don't have a place to go."

Garcia believes the termination of her tenancy, ostensibly given because the condition of her apartment requires extensive renovation, is retaliation for her decision to speak with the media about her living conditions; the other resident being forced out was offered another choice.

"My neighbor asked, and they said they'd give her a new apartment if she paid them another $2000 deposit and $2000 in rent. But she doesn't have that," continued Garcia. "I didn't ask because I'm intimidated. The manager, when he comes to my house, he's always freaking out, yelling at everyone."

According to Christian Abasto — a lawyer specializing in landlord-tenant law who's providing non-counsel advice to some of the tenants — Garcia likely will contest her ordered July 23 move-out date.

"She thinks the action is retaliatory, so she's going to fight it. She's been speaking to the media, she's something of a tenant leader," said Abasto, who noted that Garcia had kept her rent current when asked if she'd considered withholding rent based on the condition of her unit.

"I always prefer to pursue code enforcement first, and let the city do their job."

The Linda Vista group, along with a related group of activists who've recently surfaced in Ocean Beach, promise that more action, including a push for an as-yet-undefined rent-control ordinance in the city, is forthcoming.

Some landlords are pigs, The San Diego reader should tell us their names because this demands a public shaming.

Slumlords are the worst..exploiting these people. Would not surprise me at all to see a rent control ordinance passed in San Diego. The landlords have no one to blame but themselves.

I was doing some research in regards to the "ordinance" regulations for my area and came across this article in reference to my current residence. As sad as it is, the problems are still arising and I myself have had so many numerous issues with the management. I have moved into my unit on November 1, 2016 and have had two complaints of mold so severe we were getting sick and now a third situation of mold, I have a water break upstairs that it flooded so bad that water was pouring out of the light fixture downstairs, I have almost fallen over the ledge upstairs since it is so low to the ground.....not a good rail at all. Could you please direct me in the right direction to where I can get out of my lease and not lose my deposit for unsatisfactory and unsafe living conditions? Thank you so much.

So you should be happy to get out!