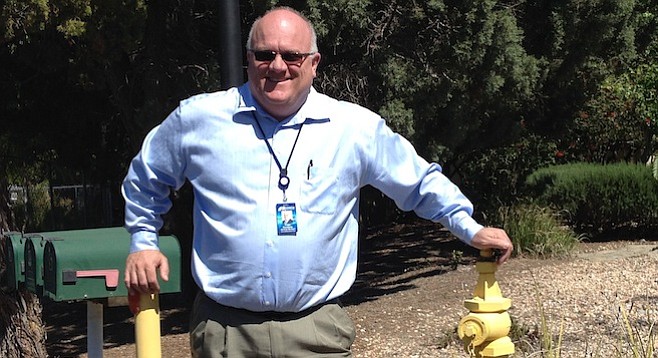 Back away from the water, Fallbrook

Water users in Rainbow and Bonsall finally feel like they’ve defeated a Goliath.

A yearlong battle has ended, thwarting a takeover by the Fallbrook Public Utility District of the mostly agricultural Rainbow Municipal Water District. The Local Agency Formation Commission (LAFCO) ruled on September 14 that Rainbow ratepayers, some 13,000 people, could keep their smaller water district. The ruling went against the commission’s own staff recommendations.

Tom Kennedy, general manager of the Rainbow district, told the Reader that about 150 people showed up at the meeting. Reportedly, it was the largest attended meeting in the commissioner’s recent memory. Over 700 emails and letters were received by agency formation commission. “Only 30 were in support of the merger,” said Kennedy.

“There wasn’t a problem that needed to be solved,” said Kennedy. “It’s was like two people who don’t like each other being forced into a marriage.”

Surveys had reported 20 to 1 in favor of keeping the Rainbow district locally controlled. The commission’s staff reportedly thought there would be a ratepayer savings for both districts.

“We’re an 80-square-mile district in rural San Diego County,” said Kennedy. “We have a different cost structure than other districts and can’t have some of the efficiencies larger districts do.”

As an example, he noted the district has a lot of miles between pipes, so it takes their trucks longer to arrive at sites. According to Kennedy, Fallbrook’s proposal of a cost savings also included firing 40 percent of the Rainbow district’s work force.

Rainbow resident Jim Mauritz led the charge for his 105-unit Oak Crest Mobile Home Estates. His park has a contract with the Rainbow district in which the district services their rural sewer system. If Fallbrook took over the Rainbow district, the special-use permit from the state would have to be re-permitted and, probably, the system re-engineered, at a cost of at least $10,000 per park resident.

Mauritz and 38 other park residents went to the meeting. “I felt good that in the commissioner’s discussion, they brought up my points about the seniors, ” he said.

It was a surprise to some that Escondido mayor Sam Abed voted for the takeover. A declared candidate for the 3rd supervisorial district, Abed, if elected next year, will govern alongside Horn and Jacobs.