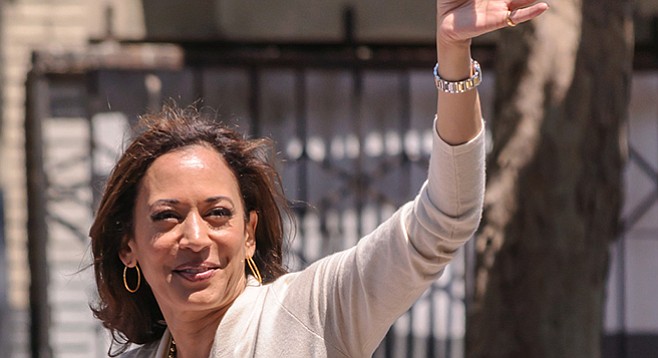 Qualcomm billionaire Irwin Jacobs and wife Joan, big-money backers of Hillary Clinton’s presidential bid, have kicked off the La Jolla giving to the U.S. Senate campaign of California Democratic attorney general Kamala Harris with $1000 each on May 5, according to campaign disclosure filings.

Qualcomm executive vice president and general counsel Donald Rosenberg came up with $500 on June 25. Employees of Robbins, Geller, the law firm descended from that of once-imprisoned mega-lawyer Bill Lerach, gave $21,650. Meanwhile, Republican assemblyman Rocky Chavez of Oceanside, another contender for the seat being vacated by Democrat Barbara Boxer, raised just $52,182 during the period. Notable donors have included Linden Blue, co-owner with his brother Neal of Predator drone maker General Atomics, with $1000 on April 17.

High Tech High founder Larry Rosenstock, another beneficiary of Jacobs family money, was off to Sydney, Australia, this summer to speak at the Amplify festival put on by AMP, “a leading independent wealth management company in Australia and New Zealand,” according to its website.

An account of the event in the September 7 issue of the Australian Financial Review reported that the famous charter-school advocate was not opposed to public education. “I’m a public education guy, and that’s important for your readers to know.” Said the story, “Discipline in the schools is not achieved by rules, but by a culture of respect for oneself and others.”

Follow the money and you will find the puppeteer behind the politician.

So where are all the leftist cries about "too much money in politics, wealthy special interests are buying elections, the little guy has no chance"? You ALWAYS hear that when the Koch Bros. fund something they believe in. But not a peep when it's huge labor unions, Michael Bloomberg, or other wealthy Democrats pouring enormous sums of money into campaigns.

Bloomberg is an independent, not a Democrat.

My only concern is the probable underlying reason why the tech business leaders are supporting the democrats: H-1B visas. My guess is that this is the quid pro quo for the said donations.