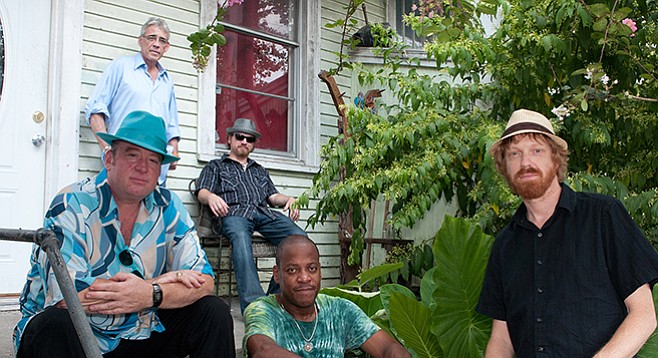 A NOLA super-group, if ever there was one. The New Orleans Suspects started out under a different name a few years ago as the result of some jam sessions at a New Orleans nightclub called the Maple Leaf. Which cooked, given the core membership: start with Willie Green on drums, who was the powerhouse behind the Neville Brothers for three decades. Next is Jeff Watkins, a tenor sax man who goes all the way back to James Brown. Reggie Scanlan has played bass for the Radiators for 33 years, guitarist Jake Eckert comes to the mix from the Dirty Dozen Brass Band, and C.R. Gruver handles all keys. No sitting on their hands ­— after deciding to become a proper band, they began cranking out CDs at the rate of one per year.

Unlike the precision horn lines favored by many of the modern R&B bands in recent times (especially those that came to pop-radio fame in America during the late 1960s and into the ’70s), similar groups out of the New Orleans region come with a distinct disregard for such accuracy that almost borders on decadence. Think Little Feat, for example, an unlikely band not from NOLA, but one that became famous for such tarnished elegance.

The job of making art in that loose territory just behind the beat is not so easy. To learn it, you go back in time and study the stuff recorded by a pianist named Henry Roeland Byrd, better known as Professor Longhair. He taught us that there is an uncertain unity in all that beautiful chaos, and that there is nothing wrong with layering on the embellishments. NOLA music is as rich a gumbo of funk, Afro-Cuban, Creole, African, rock, Dixieland, blues, and jazz as you can get. And when delivered by master players such as those in the New Orleans Suspects, that music can make anything — even a funeral procession — sound like a party.