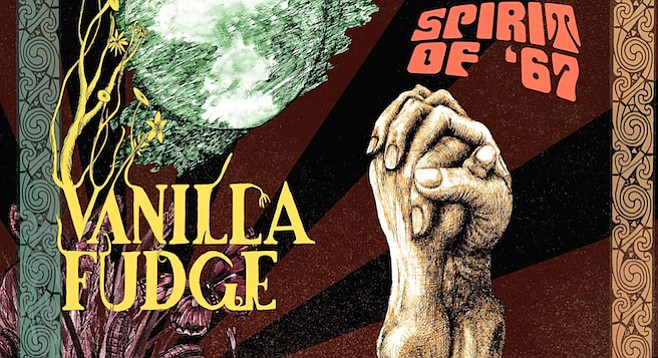 Summer of Love — the gospel

Vanilla Fudge's Spirit of '67 injects new life into some classics

The rap is short! That’s a sop to you “rap-is-crap”-ers out there (God, so tedious). The rap is also funny and over after the first cut, so it’s out of the way quick. More urgent announcement: The legendary “doyens of punk mysterioso” got their groove back, which is to say they got their old organ sound back. They spent a few reunion-era albums aping Journey and, hey, I love Journey too, but render unto Journey what’s theirs. Get yours.

"I Can See for Miles"

Vanilla Fudge's take on a Who classic track, available on Spirit of '67

And “yours” for those of you joining in late, means the Fudge purloin classic tracks, medicate them methaqualone-style, then stuff in organ swells, guitar stings, tom-tom onslaughts, and wild-eyed gospel testifying, until the gestalt, like the air-pumped beasties in that “Dig-Dug” video game, goes bloom-blooey, sticky pieces all ’round the stereo panning. This time it’s (almost) all tunes from 1967, the year of their self-titled debut. (I wasn’t there, they tell me it was nice.)

So they still aren’t a match for Zeppelin (for whom they opened) but two things I’ll say for Fudge over Jimmy’s boys: They give credit where due, and all four of them, even drummer Carmine Appice, sing well enough to sing lead. (Ever hear Jimmy try to sing anything? Medic!) Lo and behold, “I’m a Believer” is actually a gospel song, allowing (almost) anything Fudge is gospel. “Ruby Tuesday,” guess what — that’s gospel too. “For What It’s Worth” — that’s still hungover fug paranoid. It was the Summer of Love. Nothing was said about a free ride.

I'm enjoying the increased frequency of concert and album reviews on the Reader site, especially those written by Mr. Hamlin, who's really developing a distinctive voice (not an easy task with the short-form word limit imposed on reviewers for these pages!).