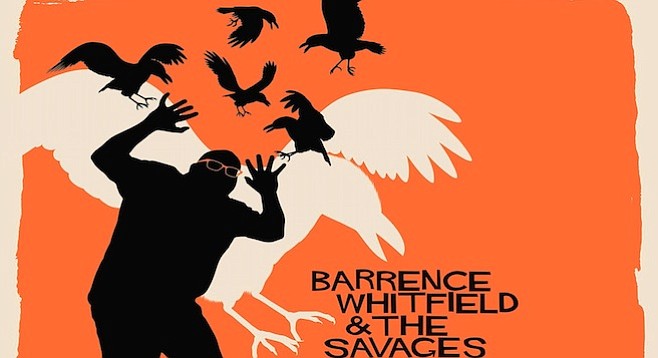 Barrence Whitfield's back Under the Savage Sky

Won’t say the guy’s name, but he was a drug dealer with a name fitting that occupation. He held down an all-nighter DJ slot at the campus station, and I sat up with him once while he stuck on a vinyl album side, catnapped that 20 minutes, back-announce the finished side, stuck on another side. Back to catnapping.

...from Barrence Whitfield's latest, Under the Savage Sky

In this way I heard side one of Barrence Whitfield’s Live Emulsified, though I already knew “The Girl From Outer Space” from dipping into it at Cellophane Square’s preview turntable. Screaming. Five minutes of it. Every now and then you could hear him settling back into his normal range, sticking a dismount as he took a fresh breath. But almost continuous screaming. Over headphones, over airwaves.

That was 1989. Come 2015 he screams only in scattered phrases. Time drags us toward the void. Upside: Subtler phrasing and, hey, you can actually dig the lyrics, saturated by talk of claws, casseroles, confinement, alcohol as both a first and last resort, a “Wolf Pack” to scare sober anyone from the Hangover franchise, odd references to The Birds, and for the big finish, a man contemplating his own death as it goes down on the sidewalk.

Guitarist Peter Greenberg produced, shoving everything into the middle at once to the front like a World Series of Poker mastermind with his chips. Whitfield and saxophonist Tom Quartulli sumo wrestle over the front of the mix. A little screaming. To keep you awake for your dose.