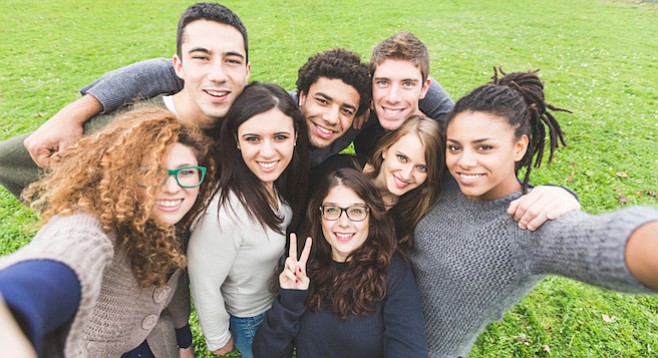 But does that suggest we are a melting pot?

San Diego ranks among the top U.S. cities in racial and ethnic, language, and region of birth diversity, according to WalletHub, a firm that studies cities, metro areas, and states for various characteristics.

Out of 313 cities, San Diego ranks 19th in racial/ethnic, linguistic, and region of birth diversity. Among 61 cities of 300,000 population or more, San Diego ranks sixth. Among the large cities, the most diverse are New York City, Oakland, and San Jose.

Beth Chung, professor of management and director of the Institute for Inclusiveness and Diversity in Organizations at San Diego State, was one of the expert commentators for the study.

I believe it's the "browning" of America and soon to be the primary color.

shirleyberan: According to the study, by 2020, minorities will be almost 41 percent of the U.S. population, up from around 30 in the year 2000. Best, Don Bauder

I am sure that some will have no problem with diversity and others will be ok as long as everyone stays in their pot.

AlexClarke: Many are uncomfortable with diversity. I often think that is what the tea party is about. Those who don't adjust to diversity will experience adversity. Best, Don Bauder

But the multinational multiculturalism is mind blowing at times.

shirleyberan: Yes, many lament the multinational multiculturalism. But remember: in earlier times in America, such as the 18th and 19th century, during waves of immigration, multinational and multicultural adjustments were even larger than they are today, I suspect. Best, Don Bauder

Twister: The French are so perspicacious. Best, Don Bauder

Yeah, and they don't even break a sweat.

Twister: It sounds like you are speaking from experience. (Yes, I caught the pun.) Best, Don Bauder

Je ne parle pas français, but I've been there a few times. My kinda folks.

Twister: You realize that your admiration for the French would not have sat well with the George W. Bush administration. Best, Don Bauder

HERE ARE THE BEST CALIFORNIA CITIES FOR FAMILY LIVING. WalletHub is out with another study. This one rates California cities on how conducive they are to family life.

In first place are Folsom, Eastvale, and San Ramon. In last place are San Bernardino, Oakland, and Huntington Park.

Inglewood, where multi-billionaire Stan Kroenke intends to build a stadium that could have the Chargers as a second tenant, is 235th of the 243 cities. Best, Don Bauder

AlexClarke: One could ask if Santee is more hospitable to families than La Mesa and Carlsbad. It's hard to argue with the low rankings of El Cajon, National City, and Calexico. And, of course, Oakland. Best, Don Bauder

The French are weirdos. But I really take issue with blatant sexism from any belief system.

shirleyberan: Like Twister, I love France and the French people. It is a wholly civilized society. Best, Don Bauder

The French find different hues interesting. And they don't take no $hit from nobody no time. Naturally, they're not popular here. Mostly, m'dears, they don't particularly give a damn.