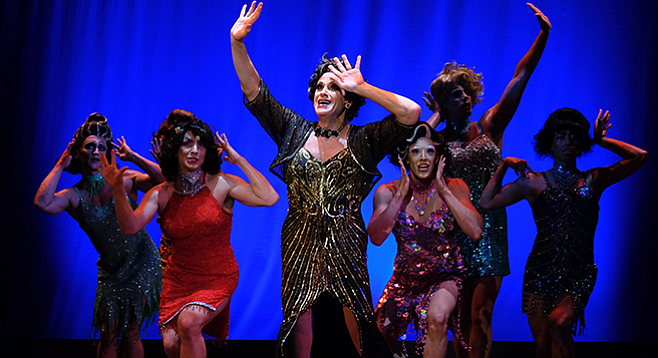 Two events must close this Sunday, plus a tribute to Arthur Wagner, giant of local theater

La Cage Aux Folles at San Diego Musical Theatre. You have until Sunday, says our guest reviewer Jon Reimer, to “throw on a wig, put on your best pair of heels, and head on down to the [Spreckels Theatre] to be part of the fun.”

Georges owns a nightclub where his partner, Albin, performs in drag. Together they raised Jean-Michael. When he plans to be married, Georges and Albin must employ a new kind of “acting.”

Jon found Robert J. Townsend “the perfect actor to play Georges,” the father-figure, in particular his singing of “Song on the Sand.” Cudos also went to David Engel as Albin, to James Vasquez, who “almost steals the shows as the quirky household servant, Jacob,” and to the “dancing chorus queens; despite costumes failing to soften their impressively muscular physiques, these transvestite talents will have you laughing and cheering until your sides split.”

Without Walls Festival at La Jolla Playhouse. 22 events in three days. Even the word “eclectic” doesn’t cover the variety of offerings, which take place all over the UCSD campus, and beyond: City Opera will do a contemporary-reimagining of Steven Storace’s Baroque opera, Queen of Carthage, in a grove of trees overlooking the Pacific (where Dido will watch Aeneas sail away); Ion Theatre’s Refuse, or the Golden Door showcases the “struggles and resiliency of San Diego’s refugee population”; Chalk Repertory’s In Case of Emergency takes place in a garage, where a woman prepares for a catastrophe – or tries to.

There’s an “interactive, snake-oil medicine show for the troubled soul,” a cello solo evoking swarming butterflies, and one about the “next generation of travel.”

The festival also includes San Diego’s most popular site-specific piece: The Car Plays. These 10-minute scenes take place in and around parked cars, the actors and audiences so close to each other the line blurs between life and art. This year’s entry, The Car Plays: Interchange, has a twist. The plays will have a common theme.

The only drawback to the Wow festival: it will go fast. Word of mouth, which requires several weeks to take hold, will have to be rapid: state of the art technology is a must for reporting the Playhouse’s state of the site-specific arts.

Tribute to Arthur Wagner. On Monday, October 12 at 4 p.m., the La Jolla Playhouse and UC San Diego will host a celebration for the late Arthur Wagner at the Mandell Weiss Theatre.

When the San Diego Theatre Critics Circle gave him a Lifetime Achievement Award, there wasn’t enough time to list all the accomplishments of this wonderful, eternally giving man of the theater. A reception will follow the tribute at the Molli and Arthur Wagner Dance Building.

Also, the family suggests that “in lieu of flowers, contributions be made to the Theatre and Dance Student Productions Endowment, which was established by the Wagner’s to ensure that ‘the show goes on’ for UCSD students.”