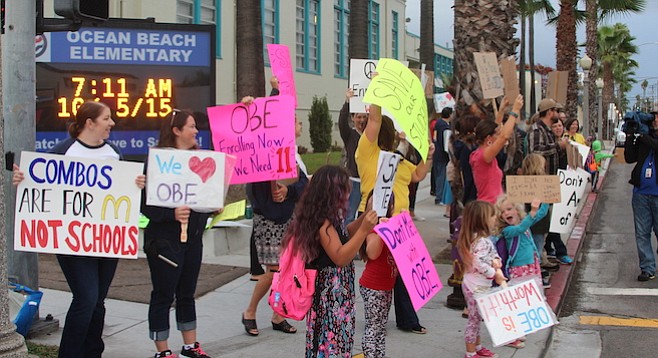 Who to teach the tots?

Dozens of kindergartners at Ocean Beach Elementary may have to separate from the only teacher they’ve ever known and undergo the uncomfortable task of transferring to another class — just weeks after beginning their public education journey.

More than 50 parents and students gathered at the school October 5th at around 7 a.m., carrying signs, handing out leaflets, and braving the rain to protest the decision to lay off two kindergarten teachers due to an unforeseen shrinkage in enrollment.

Protesters chanted “Keep our Teachers!” as cars passed along Sunset Cliffs Boulevard, frequently honking in support, as camera crews from at least three television stations descended on the scene.

The two staff members targeted for termination have the least seniority at the school and both teach kindergarten. One is currently on maternity leave, said Suzy Reid, a parent who serves in leadership roles on the school’s Site Governance Team and School Site Council.

Even though the teachers will be offered other employment, “It’s not in the best interests of the students,” said Molly Stewart, who teaches transitional kindergarten and serves as union representative for teachers on site.

Reid said closing the two classes and shuffling the students elsewhere could lead to awkward and inadvisable consequences — such as classes that combine different grade levels — and create stressful experiences for children at a fragile age.

“Our school has been performing and doing so well in the last five years,” Reid said. “We’ve created a sense of family in this community. We’d like to maintain the status quo and get the best education for our children.” 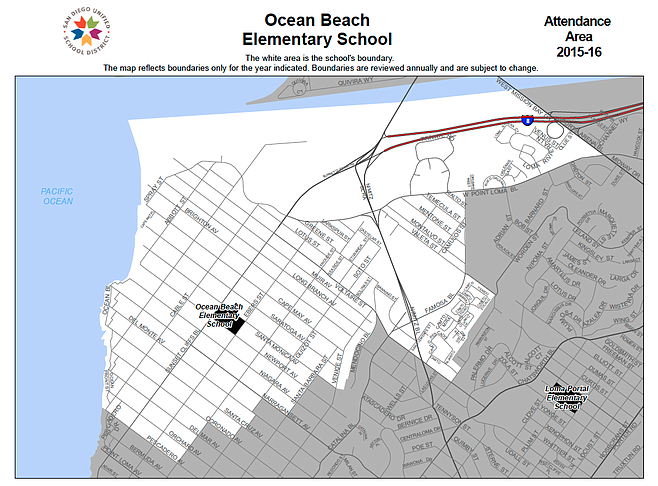 After five years of growth, school enrollment has entered a curious period of decline this year, said school principal Marco Drapeau in a “Principal Message” posted October 4th on the school’s website. The school district foresaw the decline, forecasting an enrollment of 474 students for the K-4 school, down slightly from last year’s 487.

But those projections have proven too optimistic. Figures revised less than a month after the first day of school now put enrollment at 413 — a whopping 15.2 percent fewer than last year.

“Unfortunately, our enrollment numbers can’t support the staff as it is currently,” Drapeau said in his online message.

Reid said it may be too early to make that conclusion. Enrollment often increases during the year and could spike when residents move into apartments at the old Barnard Elementary school property less than two miles east of Ocean Beach Elementary, she said.

The number of K-4 school-aged children living in the school’s attendance boundary has declined from 633 to 561 in the last year, Drapeau said. Some protesters speculated these families may be driven out by property owners who use online rental services such as Airbnb or VRBO to rent to short-term vacationers.

"Dozens of kindergartners at Ocean Beach Elementary may have to separate from the only teacher they’ve ever known...." Hmmm, I would bet that many of these children were in daycare previous to starting kindergarten and went from that daycare instructor to the kindergarten teacher, right? So what's the difference here?? - - - - - "The two staff members targeted for termination have the least seniority at the school and both teach kindergarten. One is currently on maternity leave...." looks like those children survived the change from the teacher on leave to the substitute without any consequences, right? - - - - "Reid said closing the two classes and shuffling the students elsewhere could lead to awkward and inadvisable consequences — such as classes that combine different grade levels — and create stressful experiences for children at a fragile age....." C'mon! Give these kids more credit than that!! Kids are very resilient and take to change far better than most adults! Could this possibly have more to do with the parents (adults) not wanting these changes than it has to do with the students?? My kids, and thousands others, survived these or similar changes with no scars or consequences. These kids will, too.

While the kids will survive this, certainly, this looks to me as if it could and should have been handled more adroitly. The district knew the kids were not showing up prior to the start of school. An obvious step would have been to fill up one K class before assigning students to another one. K-1 combination classes are NOT a good idea, which is why many districts just don't have combo classes as a matter of policy. The parents have a legitimate complaint here, and one that a well-run school and district could have avoided. But then again, the city schools are characterized as stumbling from mini-crisis to mini-crisis, and while supes come and go, the beat goes on.