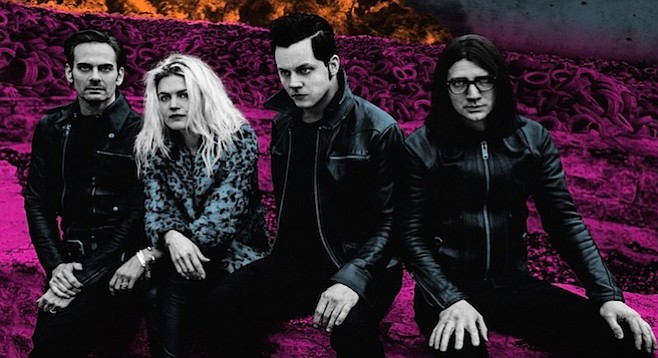 Little change in the Dead Weather

The Dead Weather open up their third LP with "I Feel Love (Every Million Miles).” It’s a robotic but robust mixture of screeching vocals from Alison Mosshart (The Kills), and the repetitive rhythm from Jack White and company make you feel uneasy and sleazy, as it sets the tone for the rest of the album.

"I Feel Love (Every Million Miles)"

...off of Dead Weather's new record, Dodge and Burn

The Dead Weather’s “super-group” lineup has Jack White primarily behind the drum kit, but with each album it seems as though more guitar influence and vocals come from him. White's sporadic and crunchy guitar runs wild throughout Dodge and Burn but is most present on "Let Me Through,” as his screeching solos pierce through the band’s sludgy instruments. "Three Dollar Hat” is an addictive cut, with guitars that sound like drunken houseflies lassoed by a calm bass line paired with Jack White’s tempered spoken-word. "Lose the Right" utilizes Dean Fertita's (Queens of the Stone Age) knack for key instruments that help the Dead Weather obtain their distinctive sound.

If you are a Dead Weather fan, you are used to their crunchy distortions and psychotic behavior, and Dodge and Burn doesn’t sound drastically different from their past releases. The songwriting is a bit more complex and there are a few unique tunes, like “Impossible Winner,” which has the Dead Weather sounding like Alicia Keys working over a James Bond theme. Overall, the album is a companion of its predecessors, which isn’t a bad thing. The band’s high-energy dementia goes a long way, even though it does sound like another Jack White project.