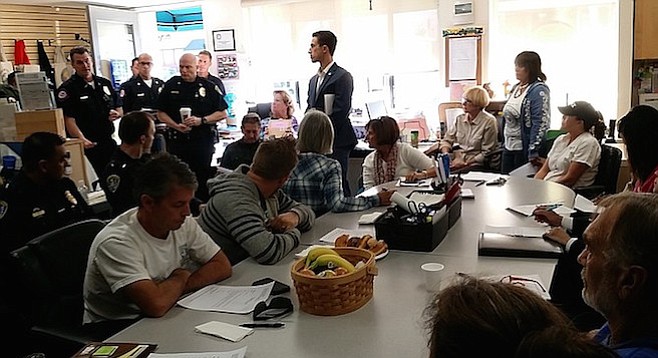 “There is no expectation of privacy. We are being filmed, too."

Over 35 people crowded into the small office of the Ocean Beach Mainstreet Association's monthly crime prevention meeting on November 17. Attending locals were introduced to the latest effort to curb crime in O.B.: security cameras. Not just on busy Newport Avenue, O.B.’s main drag. But all along the waterfront, from the pier to Dog Beach.

Speaking for Lori Zapf's office was Conrad Wear. Wear said that "Zapf's office was allocated $475,000 from the city budget to put in new carpeting. Lori took it upon herself to reallocate $50k of that to the San Diego Police Department. The police, in turn, decided to spend $25k of that money for security cameras in O.B.” Why, you may be asking?

Five of San Diego's finest were in attendance. Officer R. Pinon stated, "We think about O.B. When we're in our locker room as we get dressed, we're wondering what is going on at the seawall on Newport."

Officer David Surwillo said, "We don't have the staffing to monitor everything that goes on here. You can call them lifeguard cameras, not just police cameras. If a child is missing, or people are fighting under the pier, people run to the lifeguards. We will have it on camera and can get a conviction….

“There is no expectation of privacy. We are being filmed, too. If you think there is any misconduct by police, you will have more than just our body cameras. This is just another resource to move you in the right direction."

Some locals in attendance weren't very happy about the cameras coming in. The OB Rag sent someone to report back and has organized their own opposition group, named Citizens Against Privacy Abuse.

Editor of the Rag, Frank Gormlie, even asked this writer if I would join them. I told him that I felt we've tried everything else and I'm willing to see what the cameras can do for crime here.

The lifeguards also sent several of their people to the meeting and lifeguard lieutenant James Gartland said, "The cameras are still no replacement for boots on the ground." However, these first responders seemed to be very receptive to the cameras in aiding them to do their job.

Local business owner and crime prevention committee co-chair Mary Orem said, "We've been waiting a long time for these cameras, four years." Julie Klein, the other co-chair, stated, "With 244 crime-related incidences in the area this year, we need these cameras."

Jamie Ledezma from the city attorney's office let us know that, "A report must always be filed and film is a factor in a trial, not a decision. She went on further to state, "jurors expect everything on camera."

Police said it will be another two months or so before all the cameras are installed. There will be signs on them that read "Video cameras in use."

Ocean Beach Mainstreet Association president Denny Knox said she would like to see the statistics on the cameras in the next year or two.

On one hand allocating 50K to the police department may be a good thing. However that still leaves 425 THOUSAND dollars of taxpayer money to carpet Zapf's office. Really? For carpet? Can someone explain to me just how that makes any sense? Who will receive the contract for the carpet installation and who in the city administration offices are they related to?

In the long run, we're going to be worse off with cameras. We are slowly but inexorably turning into a police state. Great Britain is well ahead of us... not only do they have cameras nearly everywhere now, but with every expansion of government power comes increased capabilities, and therefore a call for more money and power to further exploit those capabilities. I don't really want to see where we're going to be in 50 years.